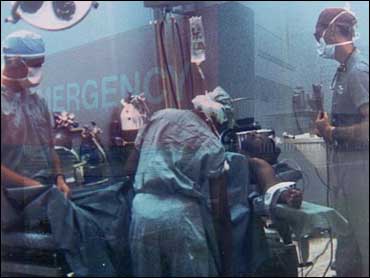 Investigators checking patient records at one military hospital discovered that 41 of their patients had been listed as dead by the Social Security Administration the year before they were treated at the hospital.

The Social Security numbers of another 225 patients at the same hospital also turned up in the death records, but with different names or birth dates. Congressional investigators said those could have resulted from simple clerical errors or from individuals "fraudulently using a deceased person's identification to receive prescriptions and treatment at no cost."

The prospect of hundreds of people using Social Security numbers of dead people to obtain free medical care was disclosed Tuesday in a General Accounting Office review that turned up faulty record keeping at military hospitals in Georgia, Virginia and Texas.

The GAO said the hospitals also are losing millions of dollars by not pursuing insurance payments for patients who have such coverage but also are entitled to free military medical care. And investigators uncovered potentially fraudulent uses of government credit cards at the hospitals and inadequate records of prescription drug inventories and usage.

"As a result of these control weaknesses, millions of dollars that could be used for patient care may be unnecessarily spent on ineligible patients, unused pharmaceuticals or unneeded purchases," the GAO said in the report released by Rep. Jan Schakowsky, D-Ill.

Schakowsky and Rep. Dennis Kucinich, D-Ohio, asked the GAO to investigate financial controls at military hospitals after the Pentagon's $24 billion military health system overspent its budget in six of the past eight years.

"We must ensure that the Pentagon is held to the same level of scrutiny as other government agencies, especially when dealing with health care for our military personnel," Schakowsky said.

Kucinich called the GAO report "another example of Congress throwing good money after bad for another Defense Department program that fails to pass even the most basic accounting standards and lacks sufficient oversight."

William Winkenwerder Jr., assistant secretary of defense for health affairs, concurred with the GAO findings and said the Pentagon is moving to correct the problems uncovered. He said new rules are being drafted to eliminate the use of fraudulent military identification cards to obtain free health care and to hold hospital officials accountable for failure to collect insurance payments.

While the GAO said its review at three hospitals cannot be projected to the overall military health care system, the Pentagon inspector general estimated last year that 5 percent of the 8.4 million Defense Department health care beneficiaries are either ineligible or have incorrect data in their records. The inspector general said the eligibility of another 10 percent could not be verified.