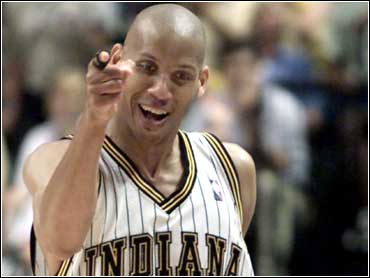 Reggie Miller is staying right where he is, hoping to add a championship ring to his collection of franchise records from 13 years with the Indiana Pacers.

The NBA's all-time leader in 3-point attempts and baskets signed a new contract Wednesday with the Pacers, becoming the fourth of the team's six free agents to re-sign.

"He has been part of every big moment that we've had here the last 13 years," club president Donnie Walsh said at a news conference which Miller did not attend.

Miller has played more games and scored more points than any player in franchise history. His clutch shooting carried Indiana to its first trip to the NBA Finals last season. The Pacers lost to the Los Angeles Lakers in six games.

The 6-foot-7 guard earned $9 million last season and was eligible to receive up to $14 million next season.

Contract terms were not disclosed by the team. ESPN and The Indianapolis Star reported Miller had agreed to a three-year, $36 million deal, which Walsh refused to confirm or deny.

"You ask any player if they have the opportunity to begin, establish and end a career with one team, I think you would get a majority of votes from players who would love to do that. I have had that opportunity," Miller said in a statement released by the team.

Led by Miller, the Pacers advanced to the Eastern Conference finals five of the last seven years and won their first conference title this season.

"He's been a great player for us, the marquee player for a long time," Walsh said. "Just from the playoffs that he had last (season). I didn't see any age in all that. It seemed to me he played as well, or better, than he ever played.

"If you go back and look at the deciding games in almost all those series leading up to the finals, it was Reggie Miller who had a great game."

"We are a shot, a rebound, a steal, a loose ball from winning the whole thing," Miller said.

"When you are on center stage and the whole world is watching, it makes you that much hungrier to get back."

On draft day 13 years ago, Miller and Walsh were booed by Indiana fans who wanted the Pacers to select native son Steve Alford. Alford played four undistinguished years in the NBA and is now the coach at Iowa.

Point guard Mark Jackson and center Rik Smits, who is considering retirement, are the remaining unsigned free agents. Walsh said he'd like to have both back.

"We've made offers. There is a team out there that has a lot of cap room. I'm not quite sure I'm going to be able to match what they offer," Walsh said of Jackson. "He may be in a position where he can get a bigger offer we might not be able to match."

"Mark has meant so much to the franchise," Miller said. "It is hard to find quality guys on and off the court. ... Mark knows how to play the game. It would be a disservice to this organization if they do not sign Mark."

Jalen Rose, who edged Miller as the team's scoring leader last season and was honored as the NBA's most improved player, signed a seven-year deal worth $93 million a week ago.

Rose, who became a starter at small forward, averaged 18.2 points in the regular season and 20.8 in the playoffs. He had a career-high 40 points against Philadelphia.

The Pacers also re-signed reserve forward Austin Croshere to a seven-year deal worth more than $51 million and backup center Sam Perkins to a one-year contract for $2.5 million.

Walsh said he had not given Smits a deadline to decide on his future.

"I basically told him that we'd sit down sometime in the middle or end of August and see how he felt," he said.