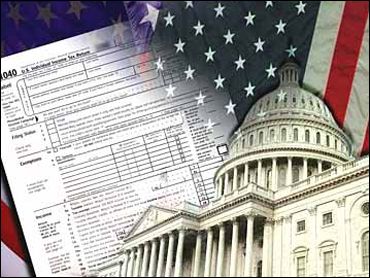 More than 17 million individuals and families could start the new year facing higher taxes because of a provision unfamiliar to most taxpayers — the alternative minimum tax.

The new year means the expiration of a temporary fix that prevents the alternative minimum tax from hitting millions of people this year on taxes due next April. But if Congress doesn't act, the additional tax will return for the 2006 tax year.

Originally designed to make sure wealthy individuals paid some tax, the alternative minimum tax reaches further into the middle class every year as inflation pushes more and more people into its grasp.

Congress regularly erects temporary dams to prevent the tax from trapping the middle class, and lawmakers are making a last-minute effort to keep that dam in place next year.

The House plans this week to debate a bill that would stick a temporary patch on the problem. The Senate included its fix in a $58 billion tax bill passed last month. But it's unlikely that lawmakers can reconcile their different pieces of legislation before the current fix expires Jan. 1.

If lawmakers cannot resolve their differences this year, they could enact a change next year that applies a solution retroactively so taxpayers would not pay an extra dime in taxes.

But without any congressional action, the alternative minimum tax will hit 19 million taxpayers next year, taxes that would have to be paid in early 2007 when returns come due.

That would include almost three out of four married, two-child couples whose incomes fall roughly between $75,000 and $100,000, said Leonard Burman, co-director of the Urban-Brookings Tax Policy Center.

"It's a large percentage of middle-class people for the first time," Burman said.

"It's a horrible tax. It's economically inefficient, it's unfair and it's mind-bogglingly complex. ... Those are actually all reasons why it's not going to happen."

The alternative minimum tax exists as a second system of taxation. It forces some individuals and families to figure their taxes twice — once under the regular system and again under the alternative system — then pay the higher amount.

It's often criticized as unnecessarily complicated, unfair and unpredictable. The President's Advisory Panel on Federal Tax Reform recommended abolishing it.

"The alternative minimum tax is a vivid example of why our tax code is dysfunctional," the nine-member committee said in a report.

It has proven difficult to curb because the solution gets more expensive as the alternative tax affects more and more people every year. The temporary patch that would blunt its effect next year would require the government to give up $30 billion in projected tax revenue.

In a letter circulated among House lawmakers, Rep. Charles Rangel of New York, the top Democrat on the tax-writing Ways and Means Committee, said the alternative minimum tax could impose a tax increase as large as $3,640 on some families next year.

The amount of the tax would vary among affected individuals and families, depending on the state in which the taxpayer resides, marital status and number of children.

Many common deductions don't count under the alternative minimum tax, including those for state and local income, property and sales taxes, and couples face a steep marriage penalty.

Rep. Thomas Reynolds, the New York Republican sponsoring the House bill under debate this week, estimated the number of New Yorkers paying the tax would increase from 379,000 to 1.6 million next year if left unchanged.

"We must act now to avoid a massive tax increase on millions of unsuspecting, middle-class Americans," he said in a written statement.