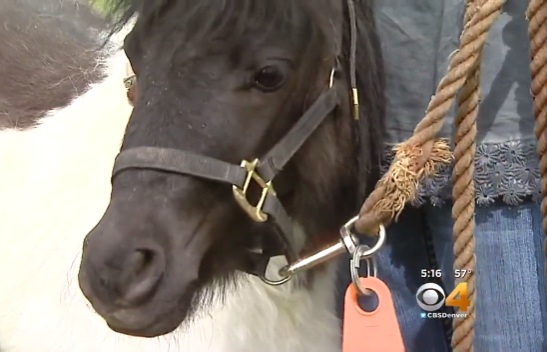 FORT COLLINS, Colo. -- A miniature horse in Colorado is headed home on Wednesday after quite an ordeal, CBS Denver reported.

The horse, named Shine, was attacked by a dog near Pueblo, Colorado, and his damaged hoof had to be amputated. But thanks to the veterinary teaching hospital at Colorado State University, Shine can trot on.

Shortly after Shine was attacked, his owner, Jacque Corsetino, was facing two hard choices -- either euthanize Shine, or go down the risky path of trying to fit her horse with a prosthetic limb.

"This was his only chance of survival and I knew I couldn't say goodbye just yet," said Corsetino.

After finding Shine bleeding from the dog attack late last year, Corsetino brought him to CSU's veterinarian hospital where he underwent a rare amputation surgery and was prepared to receive his very own prosthesis.

"He had to fight for two months before we got here, and I knew if he could fight that hard, that he had the fight to make it through the surgery," Corsetino said to CBS Denver.

On Wednesday, Corsetino watched Shine nearly break into a trot on the second day with his new limb.

"This is the most emotional I have ever been in my entire life," she said.

Dr. Laurie Goodrich performed the surgery. The prosthesis has mountain bike tire tread at its base.

"Sort of like a ski boot, if you will," Goodrich said.

She said there were no guarantees, but Shine's outlook is promising.

"It's really just a thrill and a privilege to be able to treat a horse like him," Goodrich said. "He's been really tough through all this."

As a reward for his hard work Shine got his favorite candy -- Gobstoppers. Now Corsetino hopes Shine can be an inspiration for others.

"That's our story, and if Shine can overcome it, then we want others to feel the same way," she said.

On Wednesday, Shine returned to Florence where he lives with Corsetino.