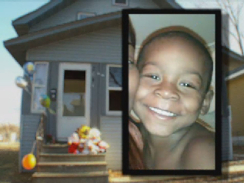 (CBS) MINNEAPOLIS - Terrell Mayes would have turned 4-years-old Sunday, had he not been killed by a stray bullet that pierced his home in north Minneapolis the day after Christmas 2011.

Friends and family decided to celebrate anyway - with a "birthday party" to remember a life cut short, and to have a carefree day for children throughout the community - the kind of day they say Terrell deserved to be having more of.

His family put together the community-wide celebration, CBS Minnesota reported.

"He deserves to be here right now, because it's his birthday," said 12-year-old Ezra, Terrell's brother. "He should be having fun."

"It feels good to see these people and it feels sad to be in the spot where my brother got shot at," said Ezra.

Ezra and Tae, 11, Terrell's other brother, say the pain and the fear still hang over them.

"I'm afraid to come outside still, because you never know... a bullet don't have no names," Ezra told the station.

The bullets holes that pierced the side of the boy's home remain.

"Because somebody right now could be in here and just start shooting and he could hit that man, her, me, my grandma, Tae, anybody," said Ezra.

No one has come forward with information that could lead police to Terrell's killer.

"People (are) scared to speak up and tell the truth....scared they are going to get shot," said Ezra.

The family prays for a killer to be found, so kids can feel safe playing in their community again. They also pray Terrell will be remembered for more than just being a victim of crime.

CBS Minnesota reports the Crime Stoppers' reward for information leading to the arrest of Terrell's killer is up to $11,000.