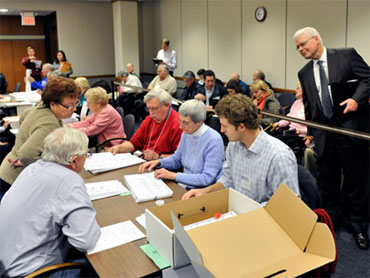 In a tiny county far from the expected hotspots in the Minnesota governor's race recount, election officials found themselves dealing with campaign representatives determined to challenge votes.

More precisely, volunteers for Republican Tom Emmer moved Monday to put the brakes on votes headed for Democrat Mark Dayton's column. In all, Emmer's team tried to send 423 of the roughly 6,300 ballots cast in Renville County to a challenge pile, baffling Dayton's campaign and the local officials.

"We had one bona fide challenge," said county auditor/treasurer Larry Jacobs, who described how an Emmer representative apologized for "what I'm instructed to do." The 422 others were classified as "frivolous."

Dayton led by about 8,800 votes coming into the recount, meaning Emmer has more incentive to shake up the count.

According to Minnesota Secretary of State figures, recount work has concluded for about 62 percent of precincts, encompassing more than 947,000 votes. Dayton picked up 20 votes compared with his Nov. 2 tallies for those precincts and Emmer lost four. Some counties didn't report any first-day data, though.

As the recount headed for a second day Tuesday, Emmer was outpacing Dayton by more than 3-to-1 in ballot challenges, which can temporarily alter the vote count.

Unless the challenges are withdrawn later, the disputed ballots will go before the five-member state canvassing board. Two years ago in Minnesota's U.S. Senate recount, the board overruled most challenges.

The stir in Renville County, a couple of hours west of the Twin Cities, caught many by surprise. Dayton's team puzzled over the onslaught, but the Emmer campaign defended its strategy.

Most votes - and the places where Dayton ran up his biggest Election Day margins - were cast in Hennepin and Ramsey counties, home to Minneapolis and St. Paul. The campaigns' top lawyers were dispatched to those counties for the recount.

There were minor flare-ups in both places, but there were relatively few challenges compared with the tens of thousands of recounted ballots so far in each.

Ken Martin, the director of Dayton's recount team, said the process saw few hiccups on opening day with the exception of Renville County.

"There doesn't seem to be a lot of monkey business going on as of this point," he said.

The goal is to wrap up the taxpayer-funded recount by mid-December. The loser has an option to sue in court, which could delay a resolution for weeks and months. If Jan. 3 arrives without a conclusion, there's a strong possibility GOP Gov. Tim Pawlenty would stay on - although Dayton has made rumblings about fighting that outcome.

More than two dozen counties finished on the first day. The others must be done by early next week, giving the canvassing board time to rule on the challenges.

In Hennepin County, home to one-fifth of Minnesota's voters, attorneys clashed over how challenged ballots should be handled, particularly those that officials had the power to deem "frivolous."

County elections manager Rachel Smith convened a closed-door meeting to get them on the same page.

Emmer attorney Tony Trimble said he wanted assurances the challenged ballots were not mixed in with the totals of verified candidate votes. Before the meeting, Trimble was heard threatening to go to court over the issue.

Smith ruled the ballots should be separated. The process was refined after the Senate recount in an attempt to head off flimsy challenges.

Challenges determined to be frivolous won't automatically be reviewed later by the state canvassing board. They'll only come up again if board members ask to see them.

"`Frivolous' is a very subjective term," Trimble said, arguing in favor of sending those ballots to the board just in case.

In St. Paul, Ramsey County elections manager Joe Mansky told the campaigns he wouldn't stop them from making challenges. But he did nudge the campaigns into letting clear-cut votes count, reviewing challenged ballots one-by-one with the lead candidate attorneys. Some challenges stuck; others were withdrawn.

Both candidates stayed out of public view.