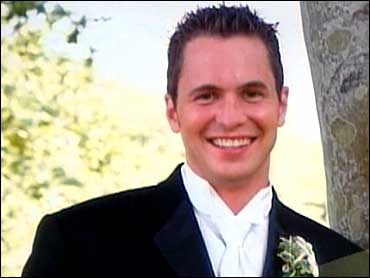 The mystery of a newlywed who vanished last July from his honeymoon cruise is heating up. As The Early Show co-anchor Hannah Storm reports, the captain of the ship said Wednesday night that George Smith IV and his wife Jennifer had been drinking heavily the night he went missing and that Jennifer was found passed out.

The Smith family says the captain's comments are just the latest example of the cruise line trying to deflect criticism of how it handled their son's disappearance.

"You think your family are a strong unit and, you know, nothing's going to really happen to that unit. But it did," says Smith's father, George.

For Maureen and George Smith, the loss of their son still seems unreal.

"It really hasn't set in yet," says George Smith. "But I guess when you get home and you have to sit in a room and think, it settles in."

It wasn't supposed to be this way — the younger George seemed destined for success, a handsome, charming young man and a good son.

"He was gentle and he was also fun," remembers his mother, Maureen. "And very serious when he had to be in the business."

He was supposed to take over the family business, a liquor store, which he had plans to grow. His future seemed even brighter when he married his girlfriend, Jennifer Hagel, on June 25.

"They planned every detail, every last detail to perfection. It was beautiful," says his sister, Bree.

The newlyweds left for their honeymoon the next day.

How did Smith's family learn he had gone missing?

"I got a call from Jennifer Hagel's father that something terrible had happened to George on the ship," Maureen Smith says. "He was really crying. And we really, really didn't believe that. You know, we thought he was somewhere else on the ship."

Royal Caribbean called the Smiths that first day, but they say the representative offered few details.

She says all the cruise line told them was that George Smith IV was missing and that they didn't have any further information.

The Smiths turned to their local congressman for help and they say it was through his office they learned that blood had been found in the couple's cabin.

"I think that if we had not gotten that information from Congressman Shays' office, we may have believed Royal Caribbean's usual story, which is it's an accident or a suicide," says Bree.

Bree says the family had very few conversations with the cruise line. "And, actually, the conversations were with their risk management department, which is basically the department that oversees litigation, preventing litigation."

The day before George disappeared, he and Jennifer had toured the Greek island of Mykonos.

That night, back on board the ship "Brilliance of the Sea," witnesses have said George and Jennifer partied heartily, with a group of young men.

These men have told authorities that they brought George back alone to his cabin, attempted to help him find Jennifer — without success — then returned George a second time back to the cabin and left.

But witnesses in the adjacent cabins have described hearing violent activity in the young couple's cabin and a loud thud.

"The impact, it sounded like something really heavy and my first thought was maybe throwing furniture overboard," fellow passenger Cleet Hyman said on the MSNBC show "Scarborough Country."

The following morning, a picture was taken by a teenage passenger, showing a large blood stain on an overhang, just below the newlywed's balcony.

Asked if she has had a chance to talk with George's wife, Jennifer, Bree says, "Unfortunately, she told us that the FBI has asked her to remain quiet about the happenings of that evening."

Whatever happened, George's family insists he would not have started a fight.

"He'd walk away from anything. He just wouldn't get into a fight," says Smith's father, George. "He had a nature that he would laugh and he'd turn his back and walk away. It must have been something big went down."

And the Smiths were outraged when Royal Caribbean seemed to suggest their son was to blame.

"They knew exactly what had gone down, but they were trying, trying to wash it over and have us feel that 'Oh, you know it's been an accident and that's the way it goes, and you know, you just have to face it.' They didn't know that we had already had started our own investigation into it," says George Smith.

"This investigation was horrible. I mean, from the beginning," says Attorney Brett Rivkind, hired by the Smiths to sue Royal Caribbean.

Rivkind says Royal Caribbean washed and then painted the blood-stained overhang that morning. Martenstein says the overhang was washed at the end of the day.

"You had guests leaning way out over their balconies trying to take pictures of the blood on the canopy. It became an issue of safety," Martenstein says. "When we were given explicit permission to do so from the Turkish authorities after they had completed their investigation, we washed it off with a power hose. We've never painted it over. We cooperated with the FBI, the Turkish authorities and the U.S. consulate throughout that day and to this day."

As the Smiths look at pictures of their only son, their sorrow is overshadowed only by determination to find out what happened to him.

"We're angry, and I'm gonna be hard and angry until I get answers and then we'll have our memorial service for our son," says Maureen.

Investigators have cleared Jennifer Hagel Smith in the disappearance of her husband, George. His family will return to the region where their son disappeared, in hopes of learning something new — and to say goodbye.