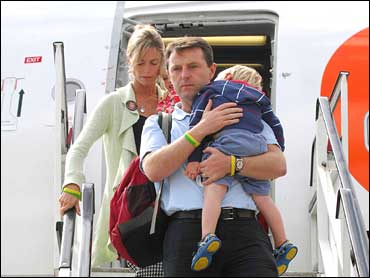 A British couple named as suspects in the disappearance of their 4-year-old daughter returned to England Sunday, days after being grilled by Portuguese police about new forensic evidence authorities believe ties them to the case.

An easyJet flight carrying Kate and Gerry McCann landed at East Midlands Airport, near their central England home, at 12:15 p.m. The couple and their 2-year-old twins boarded a minivan for the trip to their home in the village of Rothley, about 100 miles north of London.

On the airport tarmac, Gerry McCann denied being involved in the disappearance of his daughter Madeleine and said the events of the past few days had been deeply disturbing.

"Whilst it is heartbreaking to return to the U.K. without Madeleine, it does not mean we are giving up the search for her," he said.

"We have played no part in the disappearance of our lovely daughter Madeleine," he added.

Relatives say there is no way the McCanns could be involved in their daughter's disappearance.

"The suggestion from the Portuguese police that in some way they were responsible for the death of little Madeleine, a little girl they're absolutely devoted to, is absolutely nonsense," close relative Brian Kelly told CBS News correspondent Elizabeth Palmer.

"Our daughter and her husband are in no way involved in the disappearance of Madeleine," she said.

On Friday, Portuguese police named the McCanns as suspects in the May 3 disappearance of their daughter, but did not confiscate their passports or restrict their movements.

As the plane took off from Faro in southern Portugal, family spokeswoman Justine McGuinness read out a brief statement, saying the McCanns were "returning to Britain after careful thought" and in order to allow their other children a more normal life.

"Their heartfelt plea is that the search for Madeleine should continue and that people should continue to remain vigilant," McGuinness said, adding that the couple wished they could say more, but were barred under Portuguese law.

Gerry McCann said he and his wife had returned home "with the full agreement of the Portuguese authorities and police." The McCanns have said they will be available to return to Portugal for questioning if needed.

Portuguese police spokesman Olegario Sousa told The Associated Press the McCanns didn't need official authorization to travel because they had provided authorities with their home address so that they could be contacted.

He said if they intend to be away from home for more than five consecutive days they must tell Portuguese authorities where they will be reachable.

Sousa said the police investigation "is not over by any means."

"The investigation will only end when we think the case file is complete and we hand our findings to the Public Prosecutor," who then decides whether to drop the case or bring charges, he said.

"This is a difficult situation, it's an ongoing investigation, but I'm confident that we share the objective of finding Madeleine and that's the most important thing," Smith said.

The McCanns say Madeleine vanished from a hotel room in southern Portugal's Algarve region, where she and her siblings were sleeping, while her parents ate dinner at a nearby restaurant.

Until Friday, suspicion had centered on Robert Murat, a British man who lived near the hotel from which Madeleine disappeared, and who was the only formal suspect. No charges have ever been brought against him, and he has said he is innocent.

The case took a turn in recent days, after police said new forensic tests done on evidence gathered months after the girl vanished found traces of blood in the couple's car. The traces of blood, apparently missed in earlier forensic tests, were uncovered by sniffer dogs brought from Britain.

The McCanns had vowed not to leave Portugal until their daughter was found. But that stance seems to have changed even before police named them as suspects.

Gerry McCann said in a newspaper interview he was concerned their treatment indicated Portuguese police were under intense pressure to solve the case.

"We thought we were in our worst nightmare but now it just keeps getting worse and worse," he was quoted as saying in an interview with the Sunday newspaper The News of the World.

"We're desperate to get back for the kids' sake and emotional reasons," he was quoted as saying. "It's not that we're running away."

Gerry McCann's sister, Philomena, has said police had proposed a plea bargain, suggesting the girl might have been killed accidentally and offering the mother a limited sentence if she confessed.

The couple's ordeal has drawn attention around the world, partly because of an unprecedented international campaign they led to find their daughter.

The McCanns have toured Europe with photos of Madeleine and the child's stuffed animals and clothing, even meeting with Pope Benedict XVI at the Vatican. Celebrities including children's author J.K. Rowling and soccer star David Beckham made public appeals that helped the family raise more than $2 million.