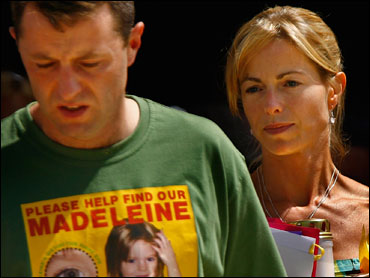 The parents of a British girl whose disappearance sparked a four-month international search were declared suspects by Portuguese police Friday, their lawyer said.

Kate McCann was named a suspect Friday morning when she went to a police station in southern Portugal for her second straight day of interrogation, lawyer Carlos Pinto Abreu said. Her husband Gerry, who later spent more than seven hours at the same police station, was also declared a suspect, Pinto Abreu told reporters.

"They have not been charged, and the investigation continues," he said without elaborating.

Their 4-year-old daughter Madeleine vanished from their hotel room in southern Portugal on May 3. The parents have strenuously professed their innocence.

Questions about the McCann's behavior have been asked, albeit quietly, since the beginning, reports CBS News correspondent Mark Phillips. Primarily, why were Madeleine and her twin younger siblings left alone in the vacation apartment that evening in the first place?

Family friends said Kate McCann told them she had been named a formal suspect and was offered a deal if she confessed.

"They tried to get her to confess to having accidentally killed Madeleine by offering her a deal through her lawyer - 'if you say you killed Madeleine by accident and then hid her and disposed of the body, then we can guarantee you a two-year jail sentence or even less,"' Gerry McCann's sister, Philomena, told ITV news.

Gerry McCann followed his wife into the police station in the southern Portuguese town of Portimao for a separate round of questioning, surrounded by a scrum of journalists and watched by dozens of local people. He emerged just after midnight (2300 GMT).

The day's developments marked a sharp and dramatic turn in a case that has pulled at the world's heartstrings for months, ever since Kate McCann ran screaming from the hotel room claiming that the toddler had been abducted. The McCanns, both doctors from central England, said they were dining at the time in a hotel restaurant, but returned frequently to check on Madeleine and her twin 2-year-old siblings.

Since then, the McCanns have toured Europe with photos, clothing and stuffed animals of Madeleine's, even meeting with Pope Benedict XVI at the Vatican. Celebrities including J.K. Rowling and David Beckham made public appeals that helped the family raise more than 1 million pounds (euro1.5 million; US$2 million).

The money, controlled by an independent auditor, is meant for charities that aid in missing children cases.

Until Friday, suspicion had focused on a British man who lived near the hotel from which Madeleine disappeared and who was the only formal suspect. But police said new forensic tests done on evidence gathered months after the girl vanished found traces of blood in the couple's car, according to Justine McGuinness, a spokesperson for the family.

The evidence - including the traces of blood missed in earlier forensic tests - was uncovered by sniffer dogs brought from Britain.

"We will fight this all the way, and we will not stop looking for Madeleine," he wrote on the couple's Web site on Friday.

Even as public opinion reeled from the new allegations against the couple, there was fresh criticism of police for taking so long to build their case.

John Corner, a McCann family friend, told the British Broadcasting Corp. that the listing of Kate McCann as a suspect gave him "an uncomfortable feeling that the police are not looking outward" for Madeleine's abductor.

But Sonya Sceats, an international law analyst at London's Chatham House think tank, said police were allowing the evidence to lead their investigation.

"It's all turned on the DNA evidence. It only became available very recently, and they are moving in response to that," Sceats said by phone.

Under Portuguese law, formal suspects gain certain legal protections, but police also have more latitude to question them. Police also have to show suspects whatever evidence they might have against them.

Clarence Mitchell, a family friend and former spokesman for the McCanns, said Friday after speaking with Kate McCann that she found the police questioning - which included an 11 hour session Thursday

"It's very intense, but she's remaining strong and determined to prove that they had nothing to do with their daughter's disappearance and they are innocent victims of the crime," he told The Associated Press.

The McCanns' cause, and the couple's apparent strength in the face of adversity, has hit a nerve among millions, who have followed their lives as they took their other children to kindergarten and attended a local church in Praia da Luz, the seaside town where Madeleine disappeared, and where they have stayed ever since. Photographs of the bright-eyed, fair-haired girl have been posted throughout Europe and the world.

The publicity has helped lead to numerous reported sightings of the girl, from as far away as northern Europe and Morocco, amid speculation she might have been taken by an international pedophile ring.

Just after Kate McCann entered the police station Thursday, another family representative read out a statement from her appealing to what she called Madeleine's abductors to "do the right thing."

"It is not too late. Please let her go or call the police," she said.

The only formal suspect until now has been Robert Murat, who lives with his mother near the hotel from which the girl disappeared. He has always maintained his innocence. Sousa said Murat's status as a suspect had not changed.