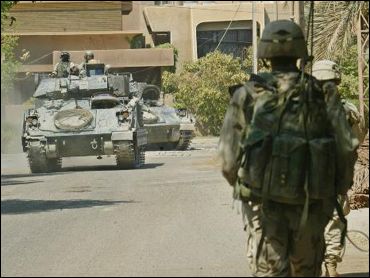 As the U.S. army postponed a summer homecoming for disappointed thousands of troops, the top civilian administrator said the length of the U.S occupation was in Iraqis' hands.

But the timing of homecomings for those soldiers, as well as the division's 3rd Squadron, 7th Cavalry Regiment, is now indefinite.

The units have been ordered to stay "due to the uncertainty of the situation in Iraq and the recent increase in attacks on the coalition forces," Blount said Monday in an e-mail message to Army spouses that was obtained by The Associated Press.

At a news conference, U.S. administrator for Iraq L. Paul Bremer said, "The timing of how long the coalition stays here is now in the hands of the Iraqi people."

Bremer applauded the formation of the Governing Council in the country on Sunday, a body that he played a major role in creating. He said the next political task for the country would be the writing of a constitution and eventually holding free elections.