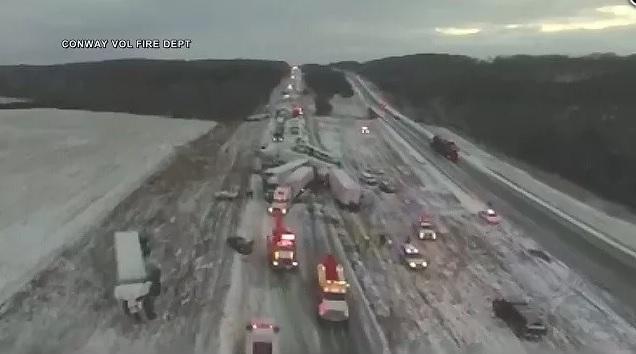 MARSHFIELD, Mo. -- Incredible drone video that was shot by volunteer firefighters shows the aftermath of a massive car crash that occurred in Missouri, CBS News affiliate KMOV-TV reports. Authorities say 50 to 100 cars were involved in several accidents Sunday on a stretch of Interstate 44, leaving one woman dead and 11 people injured.

The Conway Volunteer Fire Department shared aerial footage of the pile-up on Facebook.

According to the Missouri State Highway Patrol, all lanes of the highway were reopened Monday morning.

KMOV-TV reports icy road conditions caused additional crashes along the same highway across the state. According to police, two people were airlifted from the scene of a 30-car pile-up in Rolla. Eleven people sustained injuries in the crash. Deborah Anderson, 63, was killed in a separate 12-vehicle crash that took place near Lebanon.