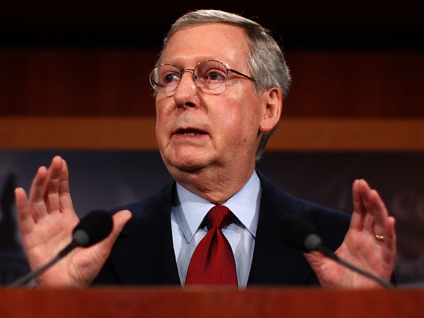 Senate Republican Leader Mitch McConnell (R-Ky.) has endorsed a moratorium on earmarks despite his earlier opposition to a push by Tea Party-backed lawmakers for such a ban in the new Congress.

"Today I am announcing that I will join the Republican Leadership in the House in support of a moratorium on earmarks in the 112th Congress," McConnell said today.

He added: "Banning earmarks is another small but important symbolic step we can take to show that we're serious, another step on the way to serious and sustained cuts in spending and to the debt."

"If adopted, this earmark ban will unite Senate Republicans with House Republicans in taking a stand against wasteful, pork-barrel spending," he said in the statement.

On last Sunday's "Face the Nation," McConnell said an earmarks ban "doesn't save any money," a reference to the fact that they account for less than one percent of the overall budget and would thus have little impact on the budget deficit.

He also expressed concerns about an earmarks moratorium giving the White House more control over federal spending, arguing that the issue is "about an argument between the executive branch and the legislative branch over how funds should be spent."

Yet despite those concerns, McConnell today abandoned his opposition.

"I'm not wild about turning over more spending authority to the executive branch, but I have come to share the view of most Americans that our nation is at a crossroads; that we will not be able to secure the kind of future we want for our children and grandchildren unless we act, and act quickly; and that only way we will be able to turn the corner and save our future is if elected leaders like me make the kinds of difficult decisions voters are clearly asking us to make," he said.

"This is no small thing," he added. "Old habits aren't easy to break, but sometimes they must be. And now is such a time."

Senate Republicans are expected to take a vote on a conference-wide ban on earmarks during organizational meetings this week. The vote could happen as early as tomorrow afternoon. In addition, Sen. Tom Coburn (R-Okla.) today announced plans to try to force a vote on an earmark moratorium by the full Congress as early as Wednesday, possibly by bringing it as an amendment to food safety legislation.

"[Senate Majority Leader Harry] Reid will have an important choice between holding a transparent vote on earmarks and obstructing the American people's desire for fiscal sanity," he said in a statement. "Nothing is more relevant or germane than beginning the hard work of getting our fiscal house in order. No bill should move before Senators vote on this matter."

McConnell's decision is a victory for DeMint and the Tea Party movement in the first post-election standoff between the movement and the establishment GOP.

While the decision allows Republicans to take a stand against what they cast as wasteful spending, it also comes with risks. Because the moratorium would be nonbinding, Republicans could still push for earmarks, exposing them to charges of hypocrisy. Democrats could also force Republicans to vote against popular earmarks in order to remain ideologically consistent.

Senate Democrats have shown little inclination to ban earmarks outright. President Obama has argued that while earmarks are sometimes used wastefully, something he opposes, "Done right, earmarks have given legislators the opportunity to direct federal money to worthy projects that benefit people in their districts, and that's why I've opposed their outright elimination."

In a statement today, however, the president said "I welcome Senator McConnell's decision to join me and members of both parties who support cracking down on wasteful earmark spending, which we can't afford during these tough economic times."

"As a Senator, I helped eliminate anonymous earmarks, and as President, I've called for new limitations on earmarks and set new, higher standards of transparency and accountability," he said. "But we can't stop with earmarks as they represent only part of the problem. In the days and weeks to come, I look forward to working with Democrats and Republicans to not only end earmark spending, but to find other ways to bring down our deficits for our children."

Earmarks made up about $14 billion of the budget last year.