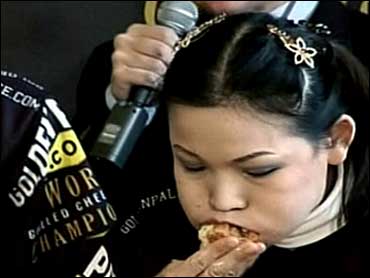 Sammy Sosa and Jason Giambi hit back-to-back home runs in the fifth inning Sunday, helping a team of major leaguers rebound from a five-run deficit to beat their Japanese counterparts 9-8.

With the victory, the major leaguers ended a seven-game series against the Japanese stars with a 5-2 record.

"I wish we could play a couple of more games," said Sosa, who hit 66 homers during the regular season. "I wanted to give the Japanese people a good show."

The Chicago Cubs outfielder hit a homer in his first at-bat in Japan, a warm-up against Tokyo's Yomiuri Giants, but did not hit another until a three-run shot that helped the major leaguers win 9-0 Saturday.

Still, he was named most valuable player of the series.

The major leaguers trailed 7-2 before homers by Sosa and Giambi off starter Satoru Komiyama narrowed Japan's lead to 7-5.

The major leaguers went ahead 9-7 when Toronto first baseman Carlos Delgado scored from third on a fielder's choice in the eighth.

Japan narrowed the gap to 9-8 in the bottom of the eighth when Kazuo Matsui reached second on a throwing error and scored from third on Orix BlueWave outfielder Ichiro Suzuki's grounder to second.

Brett Tomko of the cincinnati Reds, who relieved the New York Mets' Al Leiter in the fourth, was the winning pitcher.

"I'm very satisfied with the performance of our team," said U.S. manager Mike Hargrove of the Cleveland Indians. "After this series I have a deeper appreciation of Japanese baseball."