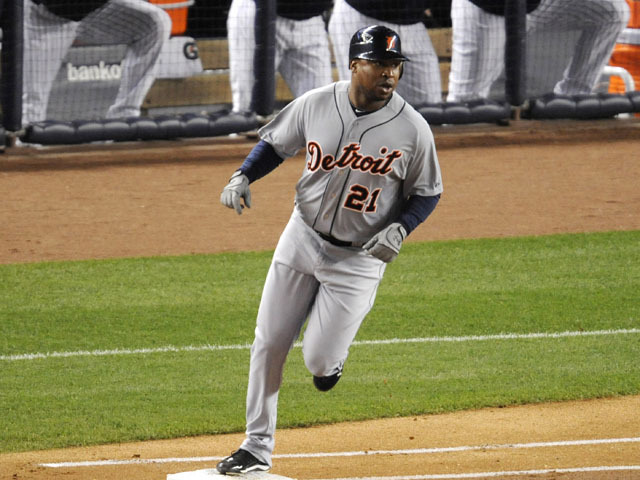 The commissioner's office said the suspension is retroactive to Friday, when Young was arrested after a late-night tussle at his hotel during which police say he yelled anti-Semitic epithets.

"Those associated with our game should meet the responsibilities and standards that stem from our game's stature as a social institution," Commissioner Bud Selig said in a statement. "An incident like this cannot and will not be tolerated. I understand that Mr. Young is regretful, and it is my expectation that he will learn from this unfortunate episode."

The statement from the commissioner's office also said that Young would be required to participate in a treatment program.

Young is eligible for reinstatement from the restricted list May 4.

Speaking before the Tigers game against the Kansas City Royals was postponed by rain, Detroit general manager Dave Dombrowski said Young will not appeal the ruling and that he will not face additional discipline by the team when he comes off the restricted list Friday.

"Under the (collective bargaining agreement), there's no dual discipline," he said. "He'll be activated and ready to play on Friday. If he's not in the lineup, that will be the manager's decision. He's been working out over the weekend, and took batting practice today, so he'll be physically ready on Friday."

Around 2:30 a.m. Friday, Young was standing outside the team hotel in New York. Nearby, a group of about four Chicago tourists staying at the hotel were approached by a panhandler wearing a yarmulke and a Star of David around his neck, according to police.

It was not clear whom Young was yelling at, but he got into a scuffle with the Chicago group, and a 32-year-old man was tackled and sustained scratches to his elbows, according to police and the criminal complaint.

Both Young and the group went inside the hotel, and at some point, police were called, and Young was arrested, police said. Young was first taken to a hospital because he was believed to be intoxicated, police said.

Young apologized to his teammates and fans in a statement before being arraigned hours after his arrest.

Dombrowski did not know any of the details of the treatment program. It is not known if Young would undergo sensitivity training, treatment for alcohol and anger issues or some combination.

"We have not been told those details, and we might never know all of them," he said. "When Miguel (Cabrera) was in a similar program last spring, I never saw the entire treatment program. The team is just told what they need to know to facilitate the player's work in the program."

Young is hitting .242 in 18 games, batting fifth in the order behind Miguel Cabrera and Prince Fielder. He has one homer and five RBIs.