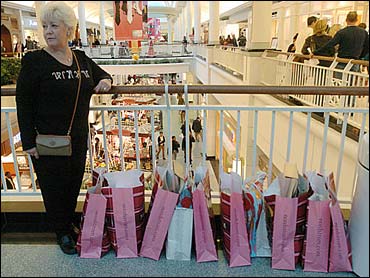 U.S. retail sales came in weaker than expected in November as gains at department stores and specialty clothing stores slowed significantly, a worrisome development at the start of the holiday shopping season.

The Commerce Department reported Tuesday that sales were up 0.3 percent in November, slightly below the 0.4 percent gain that analysts had been forecasting. The strength last month came from a 2.6 percent rebound in auto sales, which had fallen for three consecutive months after surging in July.

Retailers are hoping that rising consumer confidence, spurred by a rebound in job growth and falling gasoline prices, will give a boost to sales in the closing days of the Christmas shopping season.

The 0.3 percent increase in November sales followed a 0.3 percent gain in October, which was revised upward from an initial estimate that sales had fallen by 0.1 percent in October.

The strength last month came from the 2.6 percent jump in auto sales, an advance which followed declines of 11.7 percent in August, 3.4 percent in September and 1.3 percent in October. Auto dealers were hurt by a drop in demand after attractive summer discounts were halted. Sales of gas-guzzlers also slumped after gasoline prices spiked above $3 per gallon in early September.

Excluding autos, retail sales would have been down 0.3 percent, the biggest drop in 19 months.

However, much of that weakness reflected a good development for consumers, falling gasoline prices. Sales at gasoline stations dropped 5.9 percent in November, the biggest one-month decline in 2 1/2 years. Retail sales figures are not adjusted to take account of changes in the price of items sold.

Excluding the decline in gasoline sales, retail sales would have posted a 1 percent rise in November, the best showing since a 1.4 percent increase last July.

Sales at department stores were up 0.5 percent in November, a slowing of growth after a big 1.6 percent surge in October. Sales at specialty clothing stores edged up a slight 0.2 percent last month after a huge 2.6 percent gain in October.

The nation's biggest retailers reported a mixed start to the all-important holiday sales season that starts after the late November Thanksgiving holiday. Consumers were willing to spend but only if they found bargains.

However, retailers are hopeful that the sales season will finish strongly as consumers get a lift from continued declines in gasoline prices and further increases in jobs.