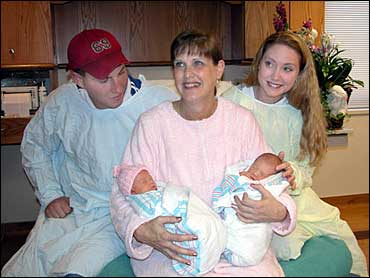 When Trish Roberts was 14, she learned she was born without a uterus, leaving her unable to bear children.

"We told her at that time, if the good Lord was willing, I would carry for her when the time came," said her mother, Sharon Dunn.

Roberts and her husband, Mike, had a frustrating experience trying to adopt a child three years ago and then were reminded of a woman who carried twins for her daughter. The couple, both 25, took Dunn up on her offer to be a surrogate mother.

On Thursday, Dunn gave birth to her twin granddaughters, Kaitlyn and Shelby.

"There's nothing I wouldn't do for those two little girls," said Dunn, 48. "I mean they're just, they're great. I love them to death, and they've made our family complete."

The girls were delivered by Caesarean section and have been in the neonatal intensive-care unit at Rapid City Regional Hospital.

"It still seems like a dream," said Roberts, holding Kaitlyn.

Two of Roberts' eggs were fertilized with her husband's sperm and implanted in Dunn's womb. "We implanted two embryos with a 50-50 chance that one would take. They both did," Roberts said.

Dunn said the pregnancy went well for someone who had her last child 23 years ago. "This is truly a miracle," she said.

Roberts said her inspiration was Christa Uchytil, whose mother, Arlette Schweitzer, gave birth to her twins in 1991.

Eleven years ago Saturday, Schweitzer gave birth to twins Chad and Chelsea for Christa Uchytil and her husband, Kevin, of Rapid City. The Uchytils visited the hospital Sunday to show their support for the new parents.

"This is wonderful," Christa Uchytil said. "You've waited a long time. I'm so happy for you."