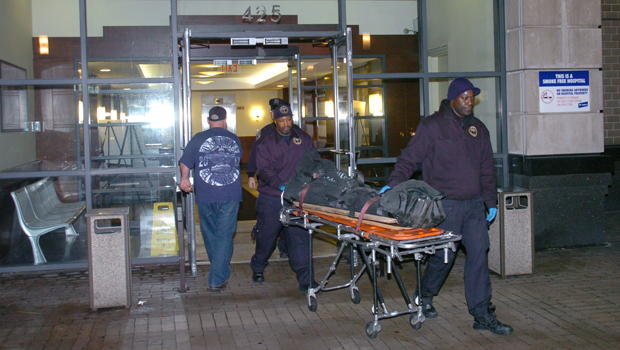 NEW YORK -- The mother of a three-year-old thrown to his death from a 52-story apartment building said the father killed the boy and then himself out of spite, reports CBS New York.

Svetlana Bukharina said in a statement that she had been nervous about her son’s visits with his father and she initially wanted them to be supervised. But she relented after a Dec. 5 court appearance.

“I was nervous about the visits, but the father never did anything violent against the child before,” she said of the two previous visits in a statement issued Monday night through a lawyer. “Both times, Kirill was happy after seeing his dad. Skype calls were also going well.”

But police said Dmitriy Kanarikov threw the child from the rooftop of the building before jumping to his own death Sunday.

He had picked up Kirill at 10 a.m. Sunday at a Manhattan police precinct, a neutral site negotiated in advance by the parents, to spend time with him for the first time unsupervised.

The couple had been married four years and separated in August and Bukharina said she had taken action after a domestic violence incident.

Their split was acrimonious. In addition to Kirill, Kanarikov had wanted their house and other property, too, she said.

“When we first separated Dmitry told me that he would leave me alone only if I left him everything we had together. Money and assets were most important to him,” she said. “He said he would take the child away and I will ‘shoot myself from grief.’ This was his sick way to take Kirill away from me.”

Police Commissioner Ray Kelly said Monday that the couple had a history of “domestic turmoil.”

Bukharina said they were last in court on Dec. 18 and were due in court again in Jan. 17. She said Kanarikov “wanted custody and would make a motion before that date.”

She said he had told his parents that he was taking the child to Grand Central, but instead went to the building on the Upper West Side and killed himself and the child.

“He planned it before the visit and probably after the judge ordered him to pay child support on Dec. 18,” she said.

Officers responding to an emergency call reporting two jumpers from the building near Columbus Circle and Lincoln Center found Kanarikov and the boy on the lower rooftops of two separate nearby buildings.

“Kirill was a very sweet, wonderful child, who was loved very much,” his mother said. “He will forever live on in my heart.”

The motive behind the tragedy remained murky on Monday. Kelly said there was no note found and that there were no threats in the hours beforehand.

Police said Kanarikov knew someone who used to live in the building where the incident took place, but said that was the only apparent connection he had to the building.

Investigators recovered a security video showing the father and son entering without being stopped by the doorman and located Kanarikov’s Lexus parked outside.

A spokesperson for the building said the company that owns it had no comment.