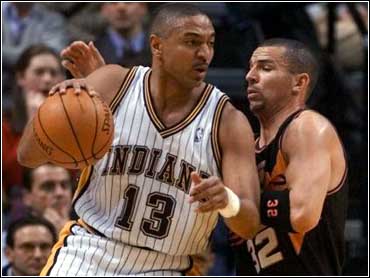 The point guard signed a four-year contract with the Toronto Raptors on Friday, leaving the Indiana Pacers despite saying earlier he wanted to end his career in Indianapolis.

In the end, the Raptors' offer of a reported $14 million and the chance to join an up-and-coming franchise with a new coach in Hall of Famer Lenny Wilkens proved too attractive.

"It's an honor to be here," Jackson said. "I just thank God for allowing a guy like me to be 35 years old and still be able to play a little bit."

"Mark's record ... as a basketball player and a person speaks for itself," general manager Glen Grunwald said.

Jackson helped the Pacers reach the NBA Finals for the first time last season. He said the Raptors did the best job of showing him he was wanted, which he called the key factor in his decision.

"In life, those are things that make a difference to me, not money," he said. "I was waiting for a team to step up to the plate, and they did just that."

Jackson, an ordained minister, cited a phone call from Wilkens he received after delivering a sermon Sunday night as the clincher.

Pacers president Donnie Walsh said Thursday he had wanted to re-sign Jackson, but acknowledged the team couldn't match a contract from a team with plenty of salary cap room.

"He got an unbelievable offer from Toronto, and I understand why he had to take it," Walsh told The Indianapolis Star. "I'll miss him a lot, and somewhere down the line I know he'll be a great NBA coach."

"The bottom line is, deep down, the people with the power there didn't want me back," he said. "I think what they tried to do was make me walk away."

But Jackson refused to speak ill of Indiana, an Eastern Conference opponent of Toronto.

"I'm not here to bash those guys," he said. "I had a great time there. They have some of the greatest fans in the world. ... I did my job there and it ran its course. I look forward to finishing my career in a Toronto Raptors uniform."

He said the Raptors expected him to "be a floor general, be an extension of the coach on the floor, make plays."

Grunwald made acquiring a point guard one of his top offseason priorities for an offense that relied almost exclusively on star forward Vince Carter. The loss of free agent Tracy McGrady, who signed with Orlando last week, freed up money to pursue Jackson. He is the Raptors' first free-agent signing this summer.

A former teammate of Raptor forwards Charles Oakley and Antonio Davis, Jackson said he was thrilled at the chance to play with them and Carter. When he indicated to Carter this week that he would sign with Toronto, he said the Raptors' star responded: "Lots of alley-oops."

Jackson has also played for the New York Knicks and Los Angeles Clippers during his 13-year career and ranks fifth in NBA career assists. He averaged 8.1 points and 8 assists in 27 minutes for the Pacers last season.

The Pacers will seek another point guard to take Jackson's roster spot, although not necessarily as a starter, Walsh said.

The Pacers drafted a point guard, Jaquay Walls, in the second round this year. The unsigned point guards on the marketplace include Tim Hardaway, who is expected to re-sign with Miami, Howard Eisley, Greg Anthony, Muggsy Bogues, Bimbo Coles and Haywoode Workman.

When Miller's contract extension was announced Wednesday, he said he wanted Jackson back.

"Mark has meant so much to the franchise," Miller said. "Mark knows how to play the game. It would be a disservice to this organization if they do not sign Mark."

Jackson first came to the Pacers in a draft day trade with the Clippers in 1994. After two seasons, he was sent to Denver in an offseason deal in 1996 that brought Jalen Rose to the Pacers. Jackson was reacquired with 30 games remaining in the 1996-97 season.