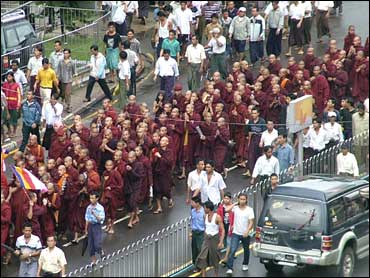 The wave of anti-government demonstrations sweeping Myanmar touched the doorstep of the country's democracy heroine Aung San Suu Kyi, as Buddhist monks allowed to march past her home Saturday said they were greeted by the detained political leader.

The encounter - described by a monk speaking to a crowd of anti-government protesters and confirmed by several witnesses - ties together a month of rising protests against the ruling military's economic policies with Myanmar's decades-old uphill struggle for democracy.

It also sets up the possibility of a violent confrontation, as the ruling junta seems increasingly forced to decide whether to crack down or to compromise with the demonstrators, whose numbers have grown as monks have taken to spearheading the protests.

"The fact that the monks are coming out is going to give people confidence. We're going to see the marches escalating," said Larry Jagan, a Bangkok-based journalist specializing in Myanmar.

He predicted that by the middle of next week, students and others will join the march and "the numbers are going to be astronomical."

"It's clear that we've got to the tipping point, that this is the beginning of the end," for the military government, he said.

The junta is known for favoring force over talk, and has never backed down in previous confrontations with the pro-democracy movement.

The current government came to power in 1988 after brutally suppressing mass pro-democracy demonstrations that had sought and end to military rule that began in 1962. Thousands were shot dead by solders, effectively terrorizing much of the country's population into submission.

"Today is extraordinary. We walked past lay disciple Daw Aung San Suu Kyi's house today. We are pleased and glad to see her looking fit and well," a 45-year old monk told about 200 people at Sule Pagoda in downtown Yangon, Myanmar's biggest city. "Daw" is an honorific used in referring to older women.

"She came out to the gate and paid obeisance to us and later waved at the crowd when we left," said the monk, who did not give his name. It's the first time Suu Kyi has been seen in public in more than four years.

Police had unexpectedly let more than 500 monks through at a roadblock on Yangon's University Avenue, where Suu Kyi's house is located. The government has been handling the monks' protests gingerly, aware that forcibly breaking them up in predominantly Buddhist Myanmar would likely cause public outrage.

The monks stopped briefly in front of Suu Kyi's house and said some prayers before leaving at the other end of the street, said a resident, who asked not to be named for fear of being harassed by the authorities.

The part of University Avenue where Suu Kyi's house is located has been closed to traffic since Sept. 17. After the monks passed, the road was closed again.

Suu Kyi, 62, has been under detention for more than 11 of the last 18 years, and continuously since May 2003. She is the leader of the National League for Democracy party, which won a 1990 general election but was not allowed to take power by the military.

The latest protest movement began Aug. 19 after the government raised fuel prices, but has its basis in long pent-up dissatisfaction with the repressive military regime. Using arrests and intimidation, the government had managed to keep demonstrations limited in size and impact - but they gained new life when the monks joined.

In the central Myanmar city of Mandalay, a crowd of 10,000 people, including at least 4,000 Buddhist monks, marched Saturday in one of the largest demonstrations since the 1988 democracy uprising, witnesses said.

At the same time, about 1,000 monks- led by one holding his begging bowl upturned as a sign of protest - marched in Yangon, the country's biggest city, starting from the Shwedagon Pagoda, Myanmar's most revered shrine and a historic center for protest movements.

It was the fifth straight day the monks have marched in Yangon. Emboldened by the monks, about 800 other people walked along with them in the drizzling rain through the heart of Yangon's commercial district.

On Friday, about 1,500 barefoot Buddhist monks marched more than 10 miles through Yangon's flooded streets, sometimes in knee-deep water, in a raging tropical downpour. More than 1,000 sympathizers marched with them.

"I feel so sorry to see the monks walking in heavy rain and taking such trouble on behalf of the people. I feel so grateful as well," said a 50-year-old woman with tears rolling down her face. Like most onlookers, she asked not to be named for fear of drawing unwelcome attention from authorities.

Meanwhile, a monks' organization for the first time urged the public to join in protesting "evil military despotism" in Myanmar, also known as Burma.

"In order to banish the common enemy evil regime from Burmese soil forever, united masses of people need to join hands with the united clergy forces," the All Burma Monks Alliance said in a statement received Saturday by The Associated Press.

Little is known of the group or its membership, but its communiques have spread widely by word of mouth and through opposition media in exile.

Some monks have started a religious boycott of the junta, symbolized by holding their black begging bowls upside down as they march. In the Myanmar language, the word for boycott comes from the words for holding the bowl inverted.