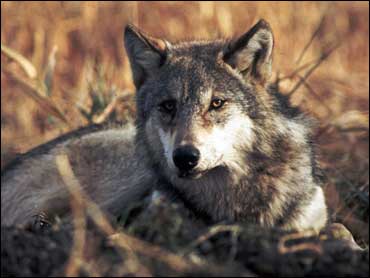 Montana wildlife commissioners approved a plan Thursday that aims to reduce the gray wolf population for the first time since the once endangered animal was reintroduced to the region 15 years ago.

The proposal approved by the Montana Fish, Wildlife and Parks Commission calls for at least doubling the number of wolves that hunters can kill and introducing an archery season to go with the rifle season.

The population of wolves in the northern Rockies has increased every year since they were reintroduced to the region in 1995 after being nearly wiped out in the last century due to conflicts with humans and loss of habitat.

There were at least 524 wolves in Montana at the end of last year, and 1,706 wolves in the combined northern Rockies region of Montana, Idaho, Wyoming and parts of Washington and Oregon, wildlife officials estimate.

Ranchers and hunters say the wolf population has now grown too high, which has led to more attacks on livestock and game.

Montana commissioners will decide in July after a public comment period whether the final quota for the 2010 hunt will be 150, 186 or 216 wolves. The quota was 75 in last year's inaugural hunt.

If hunters hit one of those targets, it would represent a drop in wolf numbers between 8 percent and 20 percent compared with last year's estimated population.

"We fully support the idea that it is time to decrease the population in Montana," commission chairman Bob Ream said. The question now is how far to go and how fast to get there, he added.

The gray wolf was listed as an endangered species in 1973, but the population growth allowed the removal of those federal protections last year in Montana and neighboring Idaho. Federal protections remain in force in Wyoming, because state law there is considered hostile to the species' survival.

After wolf management in Montana and Idaho reverted to those states, they held their first hunting seasons. Montana's hunt ended with 73 wolves killed and Idaho's with 185 killed, short of the quota of 220.

Wildlife officials in Idaho also are considering a higher quota for this year's hunt.

But a pending federal lawsuit could block states' wolf seasons this year. Environmentalists filed suit to overturn the loss of federal protections for wolves in Montana and Idaho, and oral arguments are expected to be heard in that case in June.

Montana's wolf management plan calls for a population of at least 150 wolves and 15 breeding pairs, which would affect the ability of the species to reproduce. If the number of breeding pairs falls below 10, federal protections would once more be imposed on the state's wolf population.

In 2009, there were at least 37 breeding pairs, state wildlife chief Ken McDonald told the commission.

The increased hunting quota will allow for a decrease in the population while keeping within the objectives of the management plan's goals, McDonald said.

"It's a balancing act and we're balancing a lot of different values, but we feel we can do that with (these quotas)," he said.

The proposed quota numbers do not include wolves killed by wildlife officials responding to complaints of attacks on livestock. Another 145 wolves were killed that way in 2009.

Wildlife officials are predicting the same number of such kills this year, even though the commission loosened its policy earlier this year to give federal wildlife officials greater authority to trap and shoot wolves that kill livestock.

Dean Peterson, a rancher in the Big Hole Valley, said there were 42 livestock losses to wolves in that area last year and another 18 so far this year. He said moose and elk populations have dropped in the past 10 years and he believes wolves are the reason.

Barb Cestero of the Greater Yellowstone Coalition said one year is not enough time to understand the complicated relationships between hunting and livestock conflicts. She cautioned the commission against setting a high hunting quota that might bring the state too close to the federal threshold in only the second year of the wolf's de-listing.

"You don't want to risk too much mortality too fast in a landscape that is really important," she said.