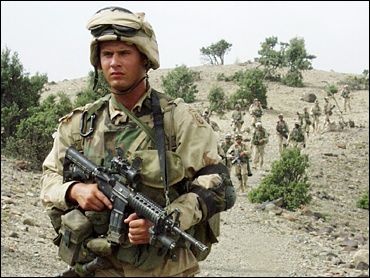 Three U.S. bases were attacked with gunfire and rockets in eastern Afghanistan over the weekend, the U.S. military said Monday. There were no reports of casualties.

Helicopter pilots spotted tracer fire at an outpost near Lawara, 110 miles southwest of Kabul, while they were landing and taking off on Saturday night, said Air Force Maj. Steve Clutter, deputy spokesman for the U.S. military in Afghanistan.

A patrol later discovered a rocket launcher aimed at the base, Clutter said. A demolition team destroyed the rocket.

Also Saturday night, two 107mm rockets exploded 500 yards and 800 yards from a U.S. base near Khost. A platoon sent to find the launch site found an 82mm mortar and confiscated it.

Three rockets were launched Saturday at a base near Gardez but landed far from their target, Clutter said. A helicopter also reported seeing tracer fire.

Other recent events suspected of links to al Qaeda and its affiliates this month have included:

Attackers typically use timers or remote control to launch rockets at U.S. bases in Afghanistan, and troops rarely find the people responsible.

"Unfortunately, we haven't been able to engage the enemy directly," Clutter said. "The enemy has been pretty stealthy; they don't come out and show themselves."

Some timers are as simple as a punctured can filled with water. As the water runs out, it completes an electrical circuit and launches the rocket.

Clutter he did not believe the three attacks heralded a resurgence of the Taliban or al Qaeda.

"This happens quite a bit. We're always concerned when there's bad guys out there shooting at our soldiers, but it is a sign that they know we're there and they known we're being effective," he said.

Also Monday, U.S military officials denied a claim by Afghan officials that a U.S. helicopter crashed while trying to land in the eastern province of Kunar. The area is one of several being combed by U.S. forces for fugitive Al Qaeda and Taliban men.

Sayed Ahmed Safi, a government spokesman in Kunar, said a U.S. helicopter clipped some tree branches and crashed, but U.S. military officials said there was no truth to the report.

On Friday, troops found two warehouses in Khost filled with weapons, and a U.S. military spokesman said they were believed to belong to Bacha Khan Zardran, a warlord who was driven out of the area last month. On Monday, Clutter said the second warehouse belonged to a local commander allied with U.S. forces.

Clutter said usable weapons from the first warehouse would be given to Afghan fighters working with the U.S. troops.