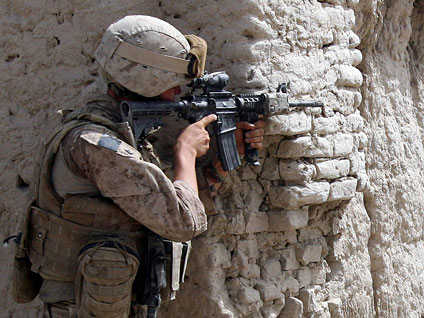 The two men have been accused of shooting 17 people, killing 12 and wounding five in Alabama, Louisiana, Maryland, Virginia and Washington, D.C.

Police said in a statement that the two were indicted on unspecified charges related to the shooting of Linda Franklin in the parking deck of a Home Depot store.

The announcement leaves Washington, D.C., as the only jurisdiction with a confirmed sniper shooting that has not filed charges.

State and federal prosecutors have yet to say which jurisdiction will try the pair first, a decision that may hinge on where a death sentence can be obtained with the most ease.

Attorney General John Ashcroft said the decision on which jurisdiction will conduct the first trial will be made after a "fact-driven analysis" of where prosecutors have the best evidence and the best law to permit the death penalty to apply if the suspects are convicted.

"I think it's well-understood on my part that I believe appropriate penalties for the kinds of atrocities that have been committed to include the ultimate sanction of the death penalty," Ashcroft told reporters Wednesday.

Investigations are pending into several other shootings, including one in Arizona.

Federal prosecutors earlier filed charges against Muhammad under weapons and extortion laws that could bring the death penalty. Federal charges have also apparently been brought against Malvo, but authorities will not say so because he is a juvenile.

Montgomery County, Md., State's Attorney Douglas Gansler, who filed six murder charges against the two suspects, said the ultimate decision rests with the federal government, which has the men in custody.

Ashcroft said he has met twice with FBI Director Robert Mueller to discuss evidence in the case and is working closely with state investigators in reaching his decision.

"This is a continuing investigation. I think it's fair to say that is it nationwide," Ashcroft said. "We're not ruling out the possibility of other situations that might be related to this set of circumstances."

As for when a decision will be made, CBS News reports that Ashcroft said that "they are looking for the jurisdiction that brings the best law, the best facts and swift justice. We will make a decision with as much dispatch as reason and prudence will allow."

A federal judge ordered Muhammad held without bail Tuesday and investigators on the other side of the country looked into a fatal shooting to see if it's related to the sniper suspects.

In court, federal public defender James Wyda accused prosecutors of trying to "shoehorn this case into federal courts" in using the extortion law. He said the government is trying to prove that "these seemingly random attacks were all motivated by a crackpot scheme to collect $10 million."

Wyda noted that authorities did not receive a note demanding the money until Oct. 19, well into the shooting spree, and have not asked his client for a handwriting sample to attempt to link him to the note.

"The government's case has significant problems," Wyda said. "There's no direct evidence that Mr. Muhammad was at the scene of any of these crimes."

Malvo was ordered detained Monday after appearing at a closed juvenile hearing in federal court in Baltimore.

In Tucson, Ariz., authorities said Tuesday that they're probing the fatal shooting of a golfer in March.

Jerry R. Taylor, 60, was shot March 19 while practicing chip shots at a golf course. He was felled by a single shot to the torso, said Assistant Police Chief Robert Lehner, and the wound indicates he was shot with a rifle from a distance. Taylor was practicing alone, and there were no witnesses to the shooting.

"Those were some of the things, combined with the time frame, that got the attention of investigators in Maryland," Lehner said.

The FBI notified Tucson police Friday that Muhammad and Malvo arrived there in mid-March to visit Muhammad's sister, then a Tucson resident.