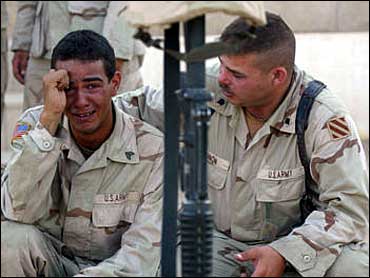 Violence claimed new victims in Iraq Monday as further questions surfaced about what prewar intelligence said about the threat posed by Saddam Hussein.

A U.S. soldier and his Iraqi interpreter were killed in a grenade and gun attack in north Baghdad, bringing to 152 the number of U.S. troops killed in action since the March 20 start of war — five more than during the 1991 Gulf War.

Two American soldiers and an Iraqi employee of a U.N.-affiliated relief agency were killed Sunday. The soldiers died in an ambush by attackers using rocket-propelled grenades and small arms near Tal Afar, a town west of the northern city of Mosul.

Meanwhile, the new chief of American and allied forces in Iraq, Gen. John Abizaid, announced plans to create a nearly 7,000-strong force of Iraqis to work with U.S. soldiers. Trained by U.S. forces, they are expected to be ready to begin operating within 45 days, he said.