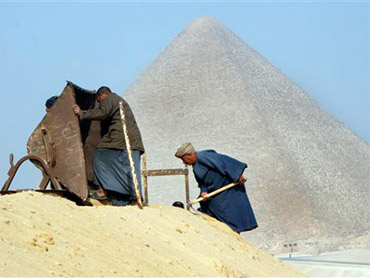 Egypt displayed on Monday newly discovered tombs more than 4,000 years old and said they belonged to people who worked on the Great Pyramids of Giza, putting the discovery forth as more evidence that slaves did not build the ancient monuments.

The series of modest nine-foot-deep shafts held a dozen skeletons of pyramid builders, perfectly preserved by dry desert sand along with jars that once contained beer and bread meant for the workers' afterlife.

The mud-brick tombs were uncovered last week in the backyard of the Giza pyramids, stretching beyond a burial site first discovered in the 1990s and dating to the 4th Dynasty (2575 B.C. to 2467 B.C.), when the great pyramids were built on the fringes of present-day Cairo.

The ancient Greek historian Herodotus once described the pyramid builders as slaves, creating what Egyptologists say is a myth later propagated by Hollywood films.

Graves of the pyramid builders were first discovered in the area in 1990 when a tourist on horseback stumbled over a wall that later proved to be a tomb. Egypt's archaeology chief Zahi Hawass said that discovery and the latest finds last week show that the workers were paid laborers, rather than the slaves of popular imagination.

Hawass told reporters at the site that the find, first announced on Sunday, sheds more light on the lifestyle and origins of the pyramid builders. Most importantly, he said the workers were not recruited from slaves commonly found across Egypt during pharaonic times.

Hawass said the builders came from poor Egyptian families from the north and the south, and were respected for their work - so much so that those who died during construction were bestowed the honor of being buried in the tombs near the sacred pyramids of their pharaohs.

Their proximity to the pyramids and the manner of burial in preparation for the afterlife backs this theory, Hawass said.

"No way would they have been buried so honorably if they were slaves," he said.

The tombs contained no gold or valuables, which safeguarded them from tomb-raiders throughout antiquity. The skeletons were found buried in a fetal position - the head pointing to the West and the feet to the East according to ancient Egyptian beliefs, surrounded by the jars once filled with supplies for afterlife.

The men who built the last remaining wonder of the ancient world ate meat regularly and worked in three months shifts, said Hawass. It took 10,000 workers more than 30 years to build a single pyramid, Hawass said - a tenth of the work force of 100,000 that Herodotus wrote of after visiting Egypt around 450 B.C.

Hawass said evidence from the site indicates that the approximately 10,000 laborers working on the pyramids ate 21 cattle and 23 sheep sent to them daily from farms.

Though they were not slaves, the pyramid builders led a life of hard labor, said Adel Okasha, supervisor of the excavation. Their skeletons have signs of arthritis, and their lower vertebrae point to a life passed in difficulty, he said.

"Their bones tell us the story of how hard they worked," Okasha said.