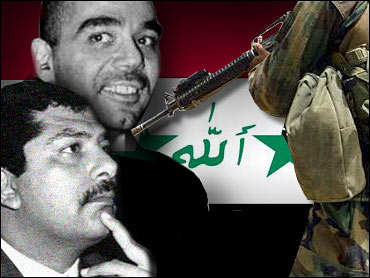 A day after the U.S. said it succeeded in killing two sons of Saddam Hussein, two U.S. soldiers were killed in separate attacks, and Arab TV aired a new audiotape supposedly of Saddam urging Iraqi soldiers to attack Americans.

A U.S. military official says two American soldiers were killed in separate attacks on convoys Wednesday, including one on the outskirts of the northern city of Mosul, where Saddam's sons Odai and Qusai were killed in a firefight the day before.

Specialist Brian Sharkey said the attack near Mosul happened while a military convoy was traveling near the town. He said one of the vehicles was destroyed by a roadside bomb.

Six soldiers were wounded in the attack.

Another convoy was attacked in Ramadi, west of the capital, Baghdad, killing one soldier and wounding two other soldiers.

Also Wednesday, an Arab satellite channel broadcast an audiotape purportedly made by Saddam Hussein on July 20 ordering Iraqi soldiers to rise up against Americans.

The voice on the tape claims that Saddam's party began reorganizing two days after the fall of Baghdad last April.

The voice, whose identity cannot be confirmed at this point, urges Saddam's former soldiers not to lose faith and praises their ongoing "honorable Jihad operations."

The voice claiming to be Saddam goes on to say the U.S. was right when it said the war is not over.

Saddam's sons Odai and Qusai - two of the most feared and powerful members of their father's deposed regime - were killed in a six-hour firefight Tuesday when U.S. forces stormed a palatial villa in the northern Iraqi town of Mosul, a senior American general said late Tuesday.

"We are certain that Odai and Qusai were killed," said Lt. Gen. Ricardo Sanchez at a news conference in Baghdad Tuesday. "The bodies were in such a condition where you could identify them."

British Prime Minister Tony Blair got the news in Hong Kong, where he was on the last leg of an Asian trip.

"This is a great day for the new Iraq," Blair told reporters early Wednesday, saying Odai and Qusai were both evil. "These particular two people were the head of the regime, which was not just a security threat because of its weapons program but was responsible for the torture and killing of thousands and thousands of innocent Iraqis people."

"The celebrations that have taken place are an indication of just how evil they were," said the British prime minister, referring to people in Baghdad and at least one other Iraqi city who apparently registered their approval by firing guns into the air.

In the official version, the shoot-out sequence began when an Iraqi informer walked into a U.S. military location in Iraq Monday night and provided information that the two brothers were staying in a villa on the north side of Mosul. But, reports CBS News Correspondent Jim Stewart, sources say U.S. intelligence had already sniffed out the same lead and the tipster only confirmed their suspicions.

Inside the villa, troops uncovered "small arms," "several documents linked to the brothers," plus the "body of Mustafa Hussein," Saddam's grandchild and Qusai's son, who was known to travel with his father, plus the "body of a lower-level bodyguard."

Military intelligence agents made the first identification by examining the bodies; then persons who knew the brothers well also confirmed their identity.

Acknowledging that the Iraqi population has been loath to believe American claims, officials say U.S. soldiers took videotape and still pictures of the battle's aftermath and suggest they may release some as early as Wednesday.

As for where Saddam's sons have been all this time, officials say they do not have a clear roadmap. There was also no sign of Saddam Hussein in the Mosul area and there has been no new intelligence on his whereabouts since U.S. forces launched a quick strike against a convoy of SUVs on the Iraqi-Syrian border.

Odai and Qusai ranked second only to their father in the deposed regime. They were Nos. 2 and 3 on the U.S. list of 55 top former Iraqi officials wanted by Washington. The U.S. had offered a $25 million reward for information leading to Saddam's capture and $15 million each for his sons.

Ironically for the brothers, if they had taken their father's advice they might still be alive today. U.S. officials now say they had reliable reports that just before Baghdad fell and the family made a run for it, Saddam had urged his sons to split up so as not to attract attention. Clearly, they didn't listen.