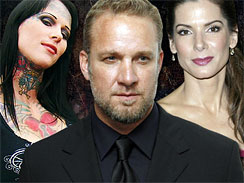 Reports of her husband's alleged infidelity have shattered the happy image of America's sweetheart, Sandra Bullock. But could things actually be getting worse for the Academy award-winning star?

David Caplan, senior editor of People magazine, said on "The Early Show" reports are surfacing of additional women claiming to have had romantic involvement with Bullock's husband, Jesse James.

Caplan says James is being implicated in other affairs by "many women" who are coming to media outlets to try to sell their stories of dating him -- including a blonde tattooed woman from Huntington Beach, Calif. Caplan says she's claiming she had a relationship with Bullock's husband from 2006 to 2009.

"That sort of is the other shoe to drop that people are waiting for," he said.

Bullock and James were married in 2005.

Bullock, Caplan said, is devastated by these new claims.

He said, "She's left Los Angeles. Right now, she's really trying -- a friend tells People that she's just really grieving (about) all this information and trying to process it, because it came such as a surprise to her. She didn't know of any of these allegations and she's really in shock right now."

Bullock is concerned about her stepchildren, Caplan said.

Rodriguez added that it seems that, no matter what happens, Bullock will likely stay in touch with her stepchildren.

Caplan agreed, saying, "There's an amazing bond. We saw that in the past few months and years. Sandra is somebody who has typically been very private about her life. We've seen her being photographed taking the kids to school, spending time at parks and stuff. There definitely is a bond.

"We spoke with a lawyer who said, in the case of getting sort of custody or something if they do split, it's very difficult for a step-parent to do, because you have to get consent from both parents. But there are no divorce filings yet. She's really trying to process it."

As for the first alleged "other woman," the heavily-tattooed Michelle "Bombshell" McGee, Caplan said a friend of McGee's told People magazine that McGee told several friends and her ex-husband that she and James were dating while he was married to Bullock.