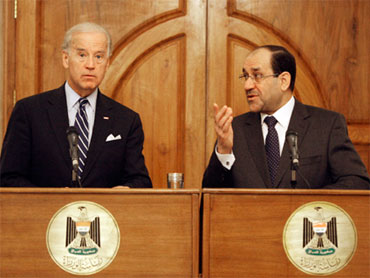 The sound of the rockets being fired could be heard on the side of the Tigris River opposite the Green Zone, and people inside al-Maliki's office where the meetings took place, including Biden and al-Maliki themselves, were warned to stay inside. The rockets could be heard exploding in the vicinity of the Green Zone but there were no immediate reports of casualties.

It was the second such attack in as many nights as Biden met with American and Iraqi officials inside the Green Zone, a fortified area in downtown Baghdad that houses government offices, agencies and the U.S. and British embassies.

After Biden's arrival Tuesday, four rockets were fired at the Green Zone in an attack that killed two Iraqi civilians.

The attacks took place after Biden had retired for the night following meetings with American officials on the first day of his visit. Three suspects were detained for questioning in the attack, but later let go.

After the meeting with Maliki, Biden said Iraq's future depended on its ability to resolve its lingering political and sectarian differences, adding that the United States was "committed to the Iraqi government and people as they work to create a peaceful and prosperous Iraq."

Although violence has declined around Iraq, deadly attacks still occur, including Aug. 19 truck bombings against the foreign and finance ministries that killed more than 100 people.

On Wednesday, a suicide bomber on a motorcycle attacked a checkpoint north of Baghdad, killing three people and wounding nine, police said.

Biden offered his condolences to victims of the Aug. 19 bombings and assured them "we are confident the terrorists will fail."

On the effort to reconcile political and sectarian divides, Biden said that al-Maliki "was kind enough to discuss with us some of the issues that are in need of resolution if the Iraqis are to achieve the bright future they fought for and deserve."

As the number of bombings and other attacks declines elsewhere in Iraq, violence has persisted in the north, which remains a battleground between Sunni Arab extremists and Iraqi and U.S. forces. Kurdish-Arab tension there also frequently flares into violence.

Other issues that were discussed included the agreement governing the withdrawal of U.S. troops from Iraq.

Al-Maliki described the meeting as "positive" but took no questions. Neither did Biden.

Biden met a broad spectrum of Iraqi officials in Baghdad.

Over his three-day visit, Biden's main focus was expected to be plans for January elections and the ongoing violence in Iraq's north. Biden last visited Iraq on July 4 to spend U.S. Independence Day with the troops. During that trip he also met with his son, Beau, who is an Army captain serving in Iraq.