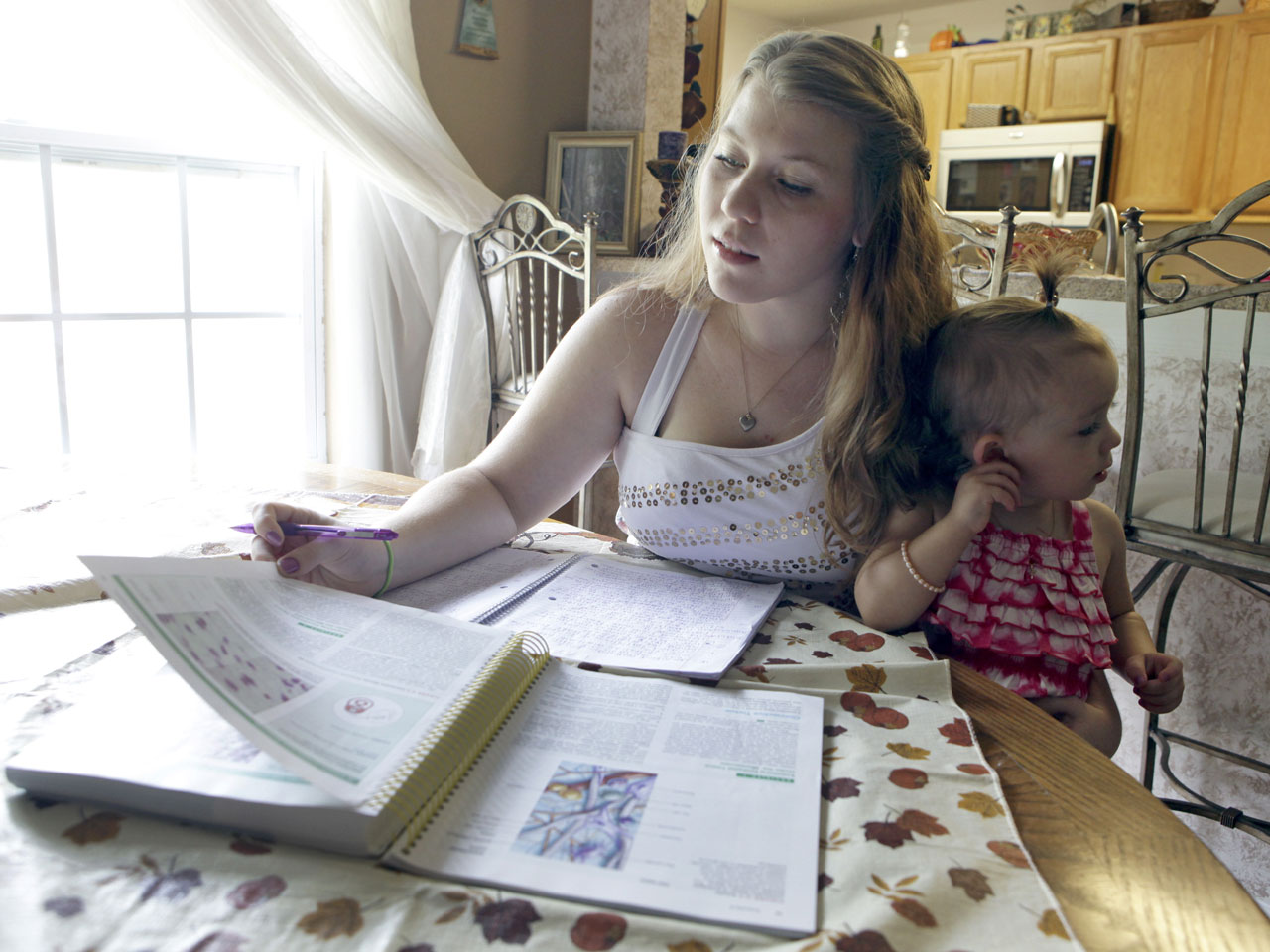 MIAMI When 15-year-old Kali Gonzalez became pregnant, the honors student considered transferring to an alternative school. She worried teachers would harass her for missing class because of doctor's appointments and morning sickness.

A guidance counselor urged Gonzalez not to, saying that could lower her standards.

Instead, her counselor set up a meeting with teachers at her St. Augustine high school to confirm she could make up missed assignments, eat in class and use the restroom whenever she needed. Gonzalez, who is now 18, kept an A-average while pregnant. She capitalized on an online school program for parenting students so she could stay home and take care of her baby during her junior year. She returned to school her senior year and graduated with honors in May.

But Gonzalez is a rare example of success among pregnant students. Schools across the country are divided over how to handle them, with some schools kicking them out or penalizing students for pregnancy-related absences. And many schools say they can't afford costly support programs, including tutoring, child care and transportation for teens who may live just a few miles from school but still too far to walk while pregnant or with a small child.

Those statistics have led child advocates to push for greater adherence to a1972 law that bans sex discrimination in federally funded education programs and activities, according to a new report by the National Women's Law Center.

Fatima Goss Graves, the center's vice president of education and employment, says offering pregnant teens extra support would ultimately save taxpayers money by helping them become financially independent and not dependent on welfare.

But budget cuts have eaten into such efforts.

California lawmakers slashed a successful program for such students in 2008, ruling it was no longer mandatory, and allowed school districts to use the money for other programs.

More than 100,000 pregnant and parenting students have participated in the program that helps them with classwork and connects them with social services. It boasted a 73 percent graduation rate in 2010 - close to the state's normal rate - and advocates said participants were less reliant on welfare and less likely to become pregnant again. That compares to several counties where only 30 percent of pregnant and parenting teens graduated.

"It's unfortunate that this effective program fell prey to the enormous budget challenges we are facing as a state," said State Superintendent of Public Instruction Tom Torlakson.

Three years ago in Wisconsin, cost-cutting lawmakers dropped a requirement for school districts to give pregnant students who live within two miles of a school building free rides to school. The requirement had been part of an effort to improve access to education and reduce infant mortality rates.

Less than half of the states have programs that send home assignments to homebound or hospitalized student parents, according to the study.

In almost half of the states, including Idaho, Nevada, Nebraska, South Dakota and Utah, the definition of excused absences is not broad enough to include pregnant and parenting students. That typically results in a patchwork of policies where some school districts don't excuse absences even if the student is in the hospital giving birth, according to the study.

But a few states have developed programs to help improve graduate rates among pregnant girls and young mothers.

In Washington, D.C., caseworkers in the New Heights Teen Parent Program often stand by the school entrance or text pregnant students and young moms to make sure they are attending classes.

When students do miss school, caseworkers take them homework assignments. About 600 students participate in the program which also helps students with housing, child care and parenting skills. But the $1.6 million federal grant funding the program runs out next year and officials said they don't have a clear future funding source.

Roughly 4,500 male and female student parents participated in a Pennsylvania program last year where case workers helped them balance school and child care. Nearly 1,300 graduated or received an equivalent, state officials said. The ELECT program, which started in 1990 as a partnership between state child welfare and education officials, monitors students' attendance, coordinates summer programs and links them with support systems in the community.

Florida allows pregnant and parenting students to receive homebound instruction and lays out a clear process to make up missed work. The state also gives those students the option of taking online classes.

In St. Johns County, where Gonzalez lives, the school district provides free day care for teen moms and bus transportation for students and their children.

Pregnant students are often stereotyped as low-achievers, but advocates say pregnancy actually motivates some to do better in school.

Gonzalez, whose daughter is now 2, said her grades improved after she became pregnant.

"I did push myself a lot harder and I made sure that I wasn't going to be that statistic," said Gonzalez, who is now married and pursuing a nursing degree.