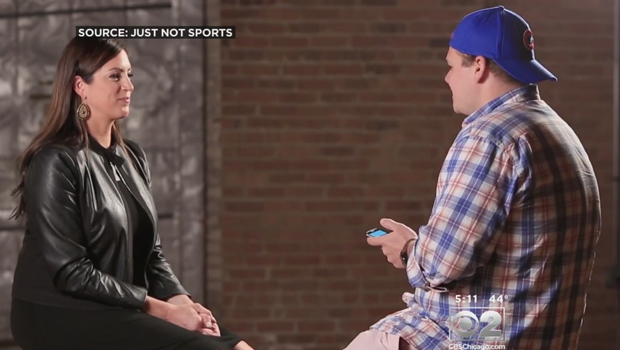 CHICAGO -- In a provocative campaign to show just how nasty Internet harassment of women can be, an online video is making the rounds, featuring men reading vile tweets received by female sportscasters.

"One of the players should beat you to death with their hockey stick," read one tweet.

The comments were read to sports writers and commentators Julie DiCaro and Sarah Spain in the video posted by Just Not Sports, CBS Chicago station WBBM reported.

The tweets were not written by the men reading them, but they are real. The video is called "More Than Mean," and it's indeed that.

"I hope your boyfriend beats you," read another tweet.

"That video turns my stomach," said journalist Amy Guth. "It's disgusting and it's vile but unfortunately, it's very typical of what a lot of female journalists - not just in sports but on any beat."

Guth is making a documentary about the online harassment of women online.

"This conversation always gets to, 'Well, I have the right to say whatever I want,'" Guth said. "Indeed you do, but with right comes responsibility."

Both Guth and Neffer Kerr, who writes for the It's The Boom Show blog for Chicago Now, have themselves been targeted.

"It usually comes from a place of cowardice," Kerr said.

Kerr asked people to not to dress in blackface for Halloween, saying, "Please don't let that by your Halloween costume." She says she was met with sexist and racist vitriol.

"It said something about my beheading," she said. "There was a rape threat in there. There were all these things but some personal information was in there too."

Guth's address was posted online for all to see. The video urges men to imagine saying hurtful things to someone's face.

"It's very easy to be a big tough guy behind a keyboard but actually looking at another person, that's a whole other level," Guth said. "We need other men to stand up and say, 'Hey, don't talk to them like this. Respect women as well.'"

A number of the comments in the video include profanity-laced insults and threats aimed at DiCaro and Spain.

Guth told WBBM she's taking on the issue -- even though she's likely to face even more harassment -- because if you say someone should do something about an issue, that person should be you.