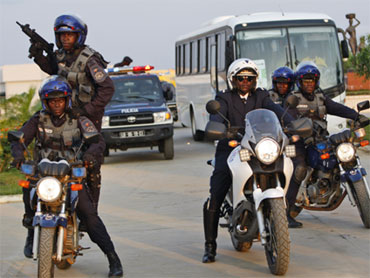 A separatist leader warned Tuesday that rebels could launch more attacks during the African Cup of Nations tournament but added that only Angolan soldiers would be targeted, not athletes or fans.

Three people were killed and eight wounded Friday during an attack on the Togolese national team bus as it traveled with an Angolan escort to the continentwide soccer tournament.

The Front for the Liberation of the Enclave of Cabinda, an Angolan separatist group, has claimed responsibility for the attack.

"Cabinda is at war, there is no truce," Rodrigues Mingas, the group's self-proclaimed leader, told The Associated Press by telephone, referring to the area in Angola where the bus was attacked.

Mingas says the separatists were only targeting soldiers guarding the bus but added that his men would continue to attack Angolan forces - even those providing security at the stadium in Cabinda, where three more African Cup games are to be played.

"War is war," Mingas said Tuesday, but he insisted that fans, players and foreigners would not be targeted.

"Our goal is not to kill foreigners and Togolese who have nothing to do with this," he said. "We are battling the Angolan military."

He said the attack was not targeted at the Togolese team or the tournament itself.

"You know the insurgents don't have a crystal ball ... it was routine," he said. "With binoculars they looked and said, 'Look there are some Angolan troops over there, let's ambush them."'

The next game in Cabinda comes Friday when Ivory Coast plays Ghana, a clash of teams with many players from Europe's richest leagues.

in the restive Cabinda region but Mingas said those were civilians, not his men. He said 15 separatists were involved in the attack on the bus, and one was injured.

He said Angolan authorities made the arrests "to reduce the pressure" on them and to show that the Angolan government was taking action. The bus attack had drawn headlines around the world.

Mingas said his group had written two month ago to Issa Hayatou, the head of the CAF African Football Federation, to warn of impending trouble.

"Mr. Hayatou did not want to take us seriously," he said.

Togo was to have played its opening game against Ghana on Monday at the tournament but the team reluctantly left Angola late Sunday. Players had said they wanted to compete to honor those killed, but their government sent the presidential plane and declared it was not safe to stay.

Togo's assistant coach and team spokesman were killed in the attack Friday, as was the Angolan bus driver. Eight people were wounded, including a goalkeeper who was flown to South Africa for treatment.