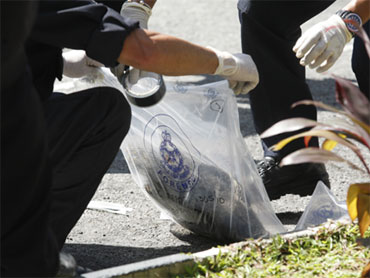 Worshippers found severed heads of pigs at two Malaysian mosques Wednesday following a spate of firebomb attacks on churches amid a dispute over the use of the word "Allah" by Christians, officials said.

It was the most serious incident to hit Islamic places of worship following vandalism and other assaults at 11 churches, a Sikh temple, a mosque and two Muslim prayer halls across the Muslim-majority country in the past three weeks. Pigs are considered unclean by Muslims.

The attacks followed outrage among Muslims over a Dec. 31 court verdict that allowed non-Muslims to use "Allah" as a translation for "God" in the Malay language. Many Malaysian Muslims believe the word should be exclusive to their religion, and that its use by others could confuse some Muslims and even lure them to convert.

Several men who went to a suburban mosque to perform morning prayers Wednesday were shocked to discover two bloodied pig heads wrapped in plastic bags in the mosque compound, said Zulkifli Mohamad, the top official at the Sri Sentosa Mosque on the outskirts of Kuala Lumpur, Malaysia's largest city.

"We feel this is an evil attempt by some people to aggravate tensions," Zulkifli told The Associated Press.

Government authorities have denounced the attacks on places of worship as a threat to decades of generally amicable relations between ethnic Malay Muslims, who make up nearly two-thirds of Malaysia's 28 million people, and religious minorities, mainly ethnic Chinese and Indians who practice Buddhism, Christianity or Hinduism.

"The person responsible for this incident just wants to incite" anger, Khalid said.

The tensions center on a court dispute in which the Herald, a newspaper published by the Roman Catholic Church in Malaysia, argued it has the right to use the word "Allah" in its Malay-language edition because the word predates Islam and is used by Christians in other predominantly Muslim countries, such as Egypt, Indonesia and Syria.

The High Court ruled last month in favor of the Herald, overturning a years-old government ban on the use of the word in non-Muslim publications. The government has appealed the decision.

Among the attacks in various Malaysian states, eight churches and two small Islamic prayer halls were firebombed, two churches were splashed with paint, one had a window broken, a rum bottle was thrown at a mosque and a Sikh temple was pelted with stones, apparently because Sikhs use "Allah" in their scriptures.

The firebombings at the Islamic halls caused little damage except for scorch marks, but Zulkifli, the mosque official, said the pig heads were "a serious desecration."

Authorities arrested 15 Muslim men in connection with the attacks on churches, and four other unidentified suspects linked to the attacks on the Muslim prayer halls.

The controversy has reinforced perceptions that the country is coming under the influence of hard-line Islam.

Last year, dozens of Muslims paraded with the bloodied head of a cow, a sacred animal in Hinduism, to protest the proposed relocation of a Hindu temple in their neighborhood.