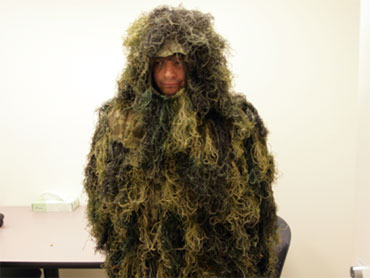 A burglary suspect dubbed "Moss Man" because he was found in a full-body camouflage outfit says his arrest outside an Oregon museum was a Halloween mix-up.

Police say the 36-year-old Portland man cut a hole in the wall. Officers found a bike and a backpack, but they didn't find the suspect until a police dog bit what appeared to be the ground. It was Liascos in the camo outfit.

He says it was a Halloween costume his kids had given him. He says he was just waiting for the police to pass by when he was bitten.

He did nto explain why had apparently cut a hole in the museum wall or why he might have been wearing a Halloween costume more than two weeks early.

Deputies investigating a possible break-in at an Oregon rock museum were surprised when they stumbled upon Liascos Oct. 14. He was bitten by the dog during a pre-dawn investigation at the museum.

Nothing was stolen from the museum, a popular tourist attraction just west of Portland that is home to gemstones, minerals, fossils and meteorites.