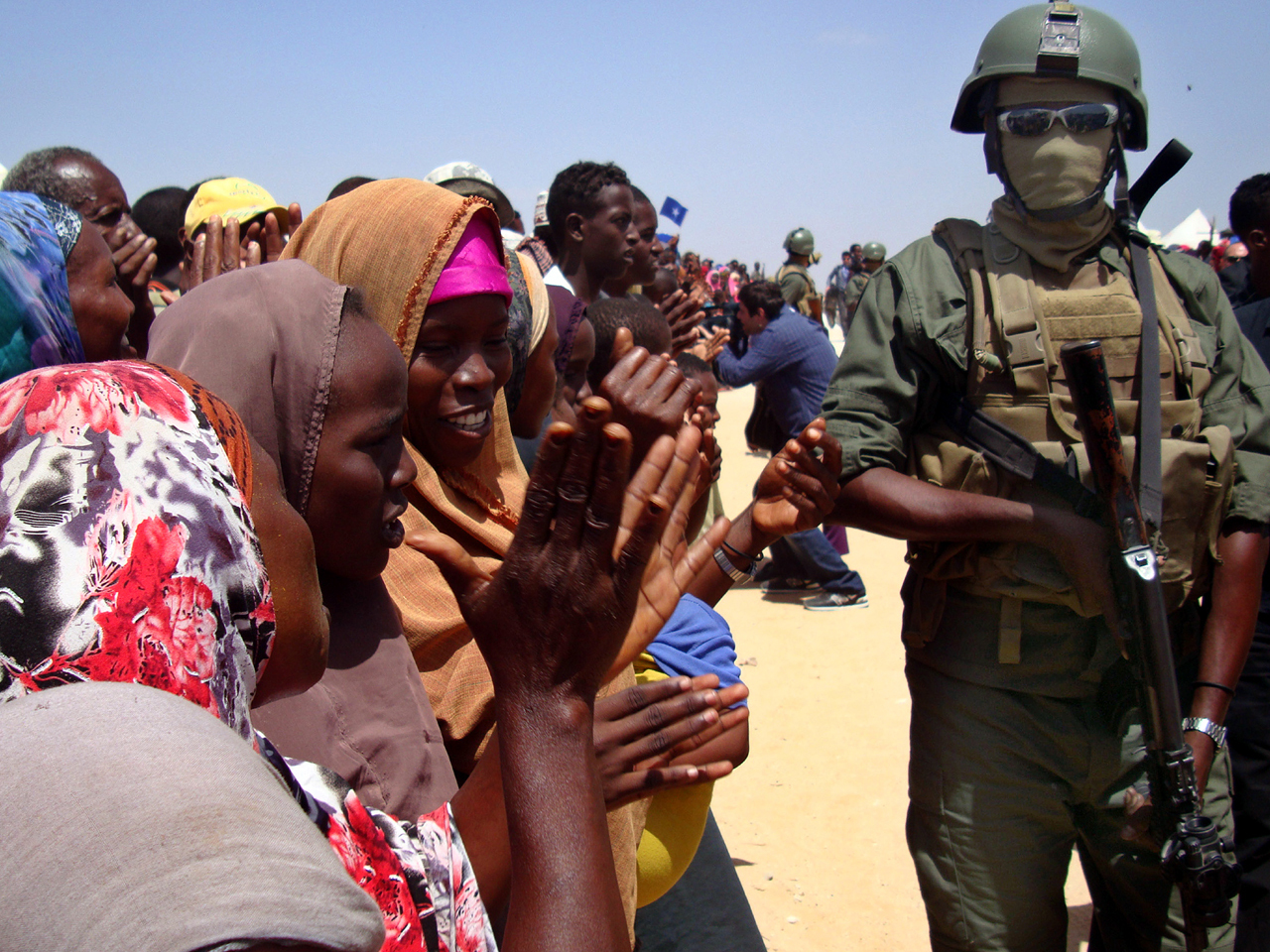 (AP) MOGADISHU, Somalia - Mogadishu is losing a label it never wanted in the first place: The World's Most Dangerous City.

The seaside Somali capital is enjoying a peace that, except for the infrequent attack, has lasted the better part of a year. Somalis who fled decades of war are coming back, as are U.N. workers who long operated out of Nairobi, the capital of neighboring Kenya.

Embassies are reopening and a U.S. assistant secretary of state visited here on Sunday, the highest-ranking U.S. official to set foot in Mogadishu since the infamous Black Hawk Down battle of 1993.

Minnesota resident Abdikhafar Abubakar fled Somalia in 1992, leaving behind his mother, three siblings and other family members. He planned to visit twice in previous years, but each time his mother warned it was too dangerous.

Last week, he finally returned to Mogadishu, where he saw his mother for the first time in two decades. This time she said it was safe and she welcomed him home with tears of joy. He later walked the streets with his brother.

"One thing I could say about Mogadishu as the most dangerous city in the world: I've been here one week and I never felt any danger," Abubakar said. "When I was out walking around, I wasn't scared. There was nothing to be scared of."

He did hear gunshots in the distance but even that didn't rattle him.

Mogadishu's designation as the World's Most Dangerous City was unofficial, of course, but widely applied.

The U.N. and embassies pulled out in the 1990s, following the collapse of the last fully functioning government in 1991. Al Qaeda-linked militants held sway over much of the city from 2007 until last August, a four-year span when full-fledged war raged with African Union troops.

On Aug. 6, the African Union fighters pushed out al-Shabab, ending the daily grind of war. Last month, the African force took control of Afmadow, an al-Shabab stronghold on Mogadishu's outskirts the insurgents had used for staging the occasional bomb attack.

Armored personnel carriers driven by Ugandan and Burundian troops still rumble through the city. But with the fighting at bay, the military convoys feel more like heavy security than front-line forces.

"This is the longest period of sustained peace Mogadishu has seen in 20 years," said Lt. Col. Paddy Ankunda, spokesman for the African Union force known as AMISOM.

Britain announced in February that it was naming an ambassador to Somalia, though he is mostly stationed in Nairobi. Johnnie Carson, the U.S. assistant secretary of state for African affairs, visited Mogadishu on Sunday and noted that eight or nine countries — including Turkey, Libya, Yemen and Sudan — now have a diplomatic presence in Mogadishu, though the U.S. does not.

The countries setting up embassies are generally using different buildings from the ones they used to occupy — whole neighborhoods were destroyed or damaged in the fighting — and they are patrolled by armed guards.

Robert Young Pelton, author of "The World's Most Dangerous Places," said al-Shabab-held Somali cities like Merca and Kismayo, where some of the foreign fighters associated with al Qaeda have fled, are more dangerous than Mogadishu.

One major goal is to transform Somali government troops in Mogadishu into a professional force that provides security instead of being a threat. Government troops are receiving training in Uganda, but many go months without pay and some remain a danger to Somalia's civilians. An Associated Press journalist last week witnessed a Somali soldier at a security checkpoint shoot a woman twice in the leg with little provocation.

Underscoring Mogadishu's transformation, massive amounts of construction materials are being shipped to Mogadishu's port. Deputy port commander Ahmed Abdi Karie noted that a house on a small plot of land in downtown Mogadishu that a year ago sold for $20,000 now goes for $100,000.

"I keep saying Mogadishu is open for business. Reconstruction is at an incredible level," said Killian Kleinschmidt, the U.N.'s deputy humanitarian coordinator for Mogadishu, who relocated to the Somali capital earlier this year.

Soccer and basketball teams and a nascent arts scene have returned. Beach-side restaurants serving lobster have opened. Many of Mogadishu's buildings still bear the scars of war, their stone facades bullet-riddled and their walls blown out. But the Somali government spokesman, Abdirahman Omar Osman, argues that Mogadishu is now safer than Baghdad or Kabul. A tourism minister may even be appointed soon to attract tourists to the city.

"Mogadishu is no longer the world's most dangerous city. It's on the peace path now," he said. "We are working on making it safe for foreigners to work here as well."

Somalia's defense minister, Hussein Arab Isse, returned to Mogadishu last year after 30 years of living in the Oakland area of California. He says Somalia's leaders know they must put aside two decades of divisions and work together to elect a new parliament, president and prime minister before Aug. 20, when the U.N. mandate that created the current transitional government expires.

The returning diaspora, he said, is proof that Somalis believe in a brighter future.

"They're all returning because people, they want to come back and they've had enough of living abroad and they're investing their money. And that gives you confidence," he said. "A year ago no one was talking about investing their hard-earned money in Somalia. Property is skyrocketing in value, and that's good."

The patients who line up outside the African Union force's outpatient clinic used to come with gunshot and bomb blast wounds. Today their medical problems are more in line with a regular metropolis — infections and traffic accident injuries, said Dr. Leonard Ddungu of the Ugandan military. Malnutrition rates are down from last year, when much of Somalia suffered from famine.

Justin Brady, the head of the Somalia unit of the U. N.'s Office for the Coordination of Humanitarian Affairs, is the first chief of any U.N. agency to be based in Mogadishu since international staff left in 1995. Last week he visited a sprawling refugee camp where more than 100,000 Somalis live in makeshift tents. One refugee told Brady: "You come here to do nothing."

Being on the ground makes a difference, Brady said.

"If you fly back to Nairobi it's easy to forget. ... It's much more in your face here that we have to get something done," he said, adding: "There's a demand from Somalis to be here."

More U.N. staff will arrive in coming weeks. The challenges of carrying out their work remain huge. No area of the city is rated lower than "high risk" by the U.N., so U.N. staff will have to travel in military convoys.

Pelton, who runs the Somalia news website Somaliareport.com and who travels to Mogadishu, said he believes the city is safe enough for Americans and Europeans to walk around.

Abubakar has a different opinion. The 45-year-old father of eight was surprised to find running water and 24-hour electricity at his mother's house, and is considering moving his family to Mogadishu. But he says living there would be safer for him — a U.S. citizen and Somali native — than most Americans and Europeans.

"I know it's not safe for a white person to walk around on foot," he said. "Even if you don't become a target everyone will be looking and saying, 'Oh, what is this guy doing here?'"