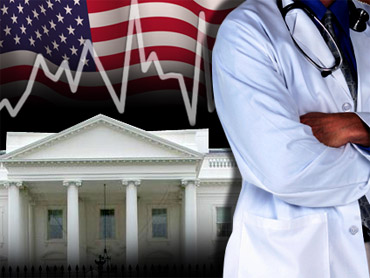 (CBS/AP/iStockphoto)
Sen. Max Baucus said today that he is optimistic some Republicans will eventually support his health care legislation, and at least one Republican he has been working with acknowledged today there is still room for compromise.

"I believe the chairman's legislation moves in the right direction away from a government-run system contained in bills that have passed other Congressional committees, but a number of issues still need to be addressed," Sen. Olympia Snowe (R-Maine) said in a statement today, adding that Baucus' leadership has "laid real and substantial groundwork for bipartisan cooperation."

She cited cost and affordability issues for both the goverment and consumers, as well as the assurance of appropriate market competition, as issues that still need to be worked out.

The other two senators who make up the GOP portion of Baucus' "gang of six" were not as pleased with the bill.

"The proposal released today still spends too much, and it does too little to cut health care costs for those with health insurance," Sen. Mike Enzi (R-Wyo.) said in a statement. "At a time when our nation faces a $9 trillion deficit, we should target assistance to those in the greatest need without creating unsustainable new entitlement programs."

Enzi said he opposed the expansion of Medicaid -- a central part of Democrats' plans to make health care more accessible. He called the program "unsustainable."

The other Republican who has been working with Baucus, Sen. Chuck Grassley (R-Iowa), gave similarly negative comments.

"This partisan proposal cuts Medicare by nearly a half-trillion dollars, and puts massive new tax burdens on families and small businesses, to create yet another thousand-page, trillion-dollar government program," Senate Minority Leader Mitch McConnell (R-Ky.) said in a statement. "Only in Washington would anyone think that makes sense, especially in this economy."

Democrats responded to the legislation with both criticism and support.

Rep. Stephanie Herseth Sandlin (D-S.D.), a leader of the moderate House Blue Dogs, said in a statement today that she agreed with Baucus that his bill meets the goals of the administration because it is deficit-neutral and lowers long term health care costs.

"I applaud Chairman Baucus and his colleagues in the Senate for their progress today and look forward to working together as we move to make health care reform a reality," she said.

"As this proposal evolves, we hope to see modifications that result in the Senate bill better reflecting the work of the House to make health care more affordable for all Americans and promote competition that is key to keeping costs lower," she said in a statement. "I believe the public option is the best way to achieve that goal."

By contrast, House progressives said today that the Baucus bill would not pass muster in the House, CBS News' Capitol Hill producer Jill Jackson reports. Representatives Anthony Weiner (D-N.Y.) and Eliott Engel (D-N.Y.), both members of one of the committees responsible for health care, told reporters that House progressives have already compromised enough by agreeing to a "weak" government-run health care plan, or "public option."

The bill "absolutely fails to meet the most basic health care needs of working families and it fails to meet the expectations we have set for our nation," AFL-CIO President John Sweeney said in a statement. "The Senate Finance proposal, sadly, is little more than a throwback to the failed policies of the last three decades that advantaged corporations over taxpayers and bestowed special breaks on the wealthy while ignoring the middle class."

The group Health Care for America Now (HCAN) strongly supports the public option but has not gone so far as to say it would not support a bill that does not include it.

Still, HCAN National Campaign Manager Richard Kirsch said today, "The Baucus bill is a gift to the insurance industry that fails to meet the most basic promise of health care reform: a guarantee that Americans will have good health care that they can afford."