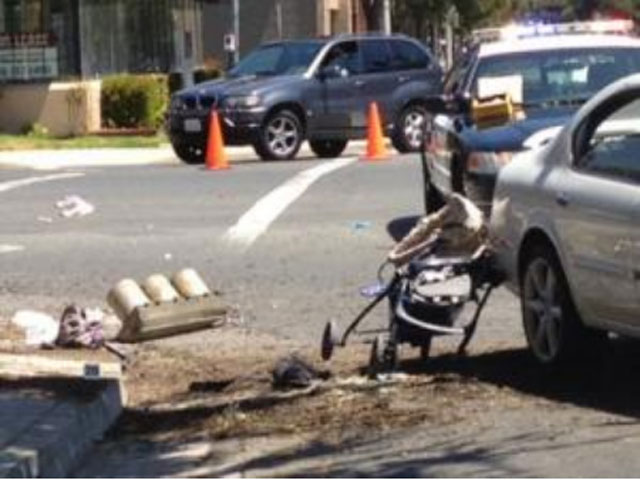 (CBS) FREMONT, Calif. - A mother and her 1-year-old daughter were hospitalized after being hit by one of two cars whose drivers were racing on a Fremont street Wednesday morning, a fire official said.

Police called it a senseless collision that happened when one of the two speeding drivers lost control, striking the woman and child, CBS San Francisco reported.

A 43-year-old woman was in a crosswalk with two children, pushing her year-old daughter in a stroller with her young son riding along on a tricycle, Battalion Chief Rich Dickinson said.

Police spokesman Bill Veteran said the out of control vehicle roared onto the sidewalk. Police said the driver may have been going at speeds of up to 70 mph on the city streets,. CBS San Francisco reported.

The mother was taken to Eden Medical Center in Castro Valley and the child in the stroller was taken to Children's Hospital in Oakland. Both had serious head injuries, authorities said.

The 21-year-old driver was transported to a Fremont hospital with minor injuries, Dickinson said. He has also been arrested. The boy on the tricycle was not injured, according to Dickinson.