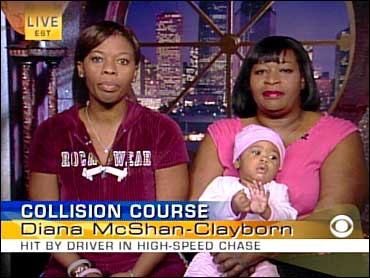 Moments after a terrifying crash on the ramp of a Houston highway, Diana McShan-Clayborn was out of the car, ready to confront the driver who swiped her.

She had been in her car, with her baby in the back seat and her mother at the wheel, when a speeding BMW nearly hit them head-on. The incident was

Police say the chase began when Jatinderjit Kaur Mann wouldn't obey orders to stop the car he was driving. Reporter Sherm-Min Chow of CBS affiliate KHOU in Houston reported that the BMW hit speeds as high as 130 mph.

So fast, police couldn't keep up.

Officers tried but failed to cut off the BMW as it swerved across highways, narrowly missing cars and motorcycles.

Then the car went up an entrance ramp in the wrong direction. It avoided four vehicles, then slammed into McShan-Clayborn's Dodge Stratus, almost head-on.

Speaking
to The Early Show's co-anchor Harry Smith, McShan-Clayborn described how she leaped from the car.

"I was getting out because of my baby," she said. "As soon as he hit, I screamed, 'My God, my baby …' Then she just started this uncontrollable screaming and crying that I've never, ever heard before."

As she headed for the back seat, she took at swing at the other car.

"As I got out and crossed the hood … I saw him there and I just hit his window and told him, 'Fool, you could have killed my baby.' "

The baby's grandmother, Birdia McShan, was at the wheel of the Dodge and ended up trapped in her seat. An ambulance took her, the baby and McShan-Clayborn to a hospital, where they were treated and released.

Chow says police pulled the BMW's driver through its sunroof, adding he was apparently involved in some sort of incident at a restaurant before the chase began. His passport indicates he is a British citizen.

The man, recently divorced, was speaking incoherently to officers after his arrest, police say. He appeared in court Thursday morning and was charged with aggravated assault and evading arrest.