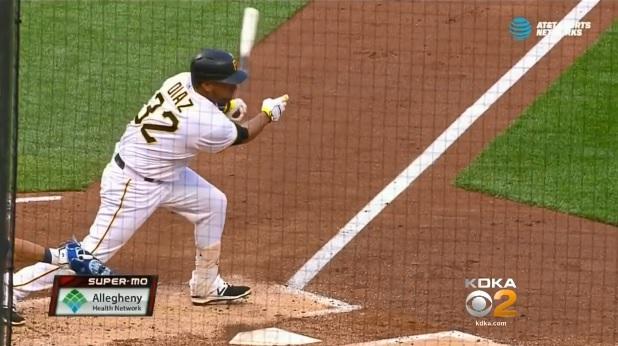 PITTSBURGH -- The mother of Pirates catcher Elias Diaz has been kidnapped in Venezuela, CBS Pittsburgh reports. Team officials did not specify the circumstances, but Venezuelan media reported Thursday that the 24-year-old player's mother was kidnapped in San Francisco, a city about 430 miles west of Caracas.

Pirates President Frank Coonelly says the team is working with authorities to secure her safe return.

"We are all shocked and deeply concerned for Elias' mother, as well as for Elias and his entire family. We have Elias' mom and Elias' entire family in our prayers. We are using all of the resources available at the Pirates and Major League Baseball to support Elias and his family during this incredibly difficult time," Coonelly said in a statement. "As we work with authorities on his mom's safe return, we will withhold further comment and ask that you please respect the family's need for privacy."

Luis Granes, who is now an American citizen, came to the United States in 1995 for an engineering job. He says life in his native Venezuela is spiraling downward. Cash is scarce. They now have what is called the "express kidnap."

"A few guys grab you, put you in the car, tour around the city looking for ATMs, grab your debit cards, your credit cards, checking on everyone. You have to give your password," Granes says. "If you're lucky, they let you go home alive."

Granes says he hopes the high profile of a Major League Baseball player will prompt the release of Diaz's mother.

"They knew who she was," he says. "They kidnap her and they're hoping that Elias will jump and pay what they are asking."

Even so, there's plenty of reason to be concerned.

"They might realize now that they grabbed a fish too big, and they might release her," Granes said.

In 2016, then Washington Nationals catcher Wilson Ramos was kidnapped in Venezuela. Ramos was seized at gunpoint outside his family's home in the city of Valencia and was rescued by police commandos two days later in the mountains of Carabobo state. Venezuelan authorities formally charged eight suspects in connection with his kidnapping.