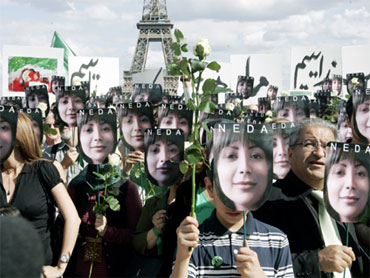 The mother of a slain Iranian woman who became an icon for opposition protesters said she has no doubt that pro-government forces were to blame for her daughter's death, according to comments released Monday by a rights group.

Hajar Rostami denounced Iranian authorities for supporting claims that her daughter, Neda Agha Soltan, was part of a plot to discredit the Islamic state and not a victim of harsh security crackdowns in the aftermath of last year's disputed presidential election.

Soltan was shot during a protest rally on June 20, 2009, and her dying moments were captured on video and posted on the Internet. Her death quickly became a rallying point for demonstrators and intensified international outrage at Iran's attempts to crush dissident during the worst internal unrest since the 1979 Islamic Revolution.

"She went out to protest and was killed by their (government) forces. There is no other story," said Rostami in rare public comments to the International Campaign for Human Rights in Iran, which has offices in New York and Washington.

Rostami said she has not faced direct pressure from authorities since her daughter's death. But she complained about programs on state television and comments by officials that suggest her daughter's death was either a suicide or part of an opposition conspiracy to undermine the state.

"No one believes these lies, neither Iranian people nor those abroad. ... They killed Neda in broad daylight. I filed a complaint, but so far I haven't gotten very far," Rostami was quoted as saying.

She appealed to human rights groups and other international bodies to demand a full investigation into the slaying. No one has been charged.

"Now I want the world to help me find Neda's murderer. I have lost my child and my life has been turned upside down. Every time I return from her grave site, it feels as though my daughter only just died and we just buried her," she said.