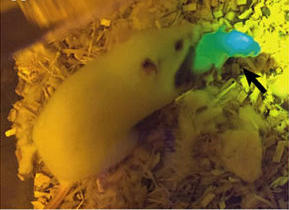 In another step forward in the world of 3D-printed tissues, U.S. scientists report they've created a "bioprosthetic" ovary in a mouse using the technology -- and the mouse has given birth to healthy pups.

She said the mouse study suggests 3D-printed ovaries might someday help infertile women, although research in animals does not always pan out in humans.

"Using bioengineering, instead of transplanting from a cadaver, to create organ structures that function and restore the health of that tissue for that person, is the holy grail of bioengineering for regenerative medicine," explained Woodruff, who is a reproductive scientist and director of the Women's Health Research Institute at Feinberg.

In medical 3D printing, scientists manufacture tissues or even rudimentary organs in the lab by depositing and fusing together various materials, including even living cells.

In the Northwestern effort, Woodruff and colleagues first removed the ovary of the female mouse. They then replaced it with the bioprosthetic ovary: a "scaffold" made by 3D technology that could house immature eggs.

The implanted ovary proceeded to ovulate and restore fertility to the mouse, which later gave birth to pups -- the mouse "mom" has even nursed those pups, the researchers noted.

According to co-researcher Ramille Shah, the Northwestern team used a safe, tolerable form of gelatin -- a "hydrogel" -- to build the scaffold. This material was stiff enough for transplant but also porous enough to interact with the mouse's other tissues.

"Most hydrogels are very weak, since they're made up of mostly water, and will often collapse on themselves," Shah said in a Northwestern news release. "But we found a gelatin temperature that allows it to be self-supporting, not collapse, and lead to building multiple layers. No one else has been able to print gelatin with such well-defined and self-supported geometry."

That structure appears to have allowed hormone-producing cells called ovarian follicles to function healthily within the manufactured ovary.

"This is the first study that demonstrates that scaffold architecture makes a difference in follicle survival," Shah said. "We wouldn't be able to do that if we didn't use a 3D printer platform."

What's next? According to the researchers, in the future, these bioprosthetic ovaries might help restore fertility to women who've lost their ovarian function due to diseases such as cancer, or cancer treatment.

"What happens with some of our cancer patients is that their ovaries don't function at a high enough level and they need to use hormone replacement therapies in order to trigger puberty," explained co-researcher Monica Laronda. She's a former postdoctoral fellow in the Woodruff lab.

"The purpose of this scaffold is to recapitulate how an ovary would function," Laronda explained. "We're thinking big picture, meaning every stage of the girl's life, so puberty through adulthood to a natural menopause."

The findings were published May 16 in Nature Communications.