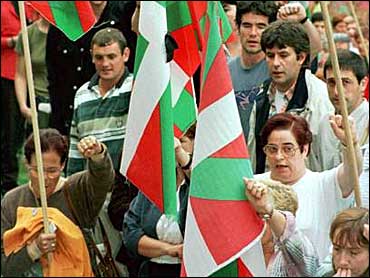 Parliament overwhelmingly approved a legal ban against a Basque political party Monday after a judge ordered its offices closed, accusing it of complicity in the "crimes against humanity" of the outlawed separatist group ETA.

The move tightened the noose around the party — which has seven seats in the Basque regional assembly — following passage of a law in June allowing the court to outlaw parties deemed to be actively or tacitly supporting terrorism.

The motion was passed during a special session of Parliament convened during summer recess, with Prime Minister Jose Maria Aznar and his entire Popular Party government present.

"Batasuna is a mask of ETA ... that justifies ETA's crimes," Luis de Grandes, member of the ruling Popular Party, told the session.

Although Batasuna denies any links with ETA, the government alleges that the party is a key part of the armed group's shadowy network of commandos, fund-raising activities and recruitment operations.

The bill was also backed by the opposition Socialists. However, legislators from parties in the Basque, Catalonian, Galician and other small regions either abstained or voted against the motion.

"Our party will vote unanimously 'No' because we disagree on the method and we don't think it's the solution," said an agitated Basque Nationalist Party speaker Inaki Anasagasti.

Anasagasti said he feared his own nonviolent party that favors Basque self-determination would also be banned.

Batasuna's offices will be closed and the 24-year-old party will be barred from calling public demonstrations or political rallies or receiving a share of electoral funds, according to Garzon's 375-page order. The party also cannot run in municipal elections scheduled for May of next year.

But lawmakers representing the party will be allowed to serve out their terms in the 75-member Basque regional parliament. The party also has nearly 900 town councilors in the three Basque provinces and neighboring Navarra.

Garzon' order said ETA had killed 836 people since its first attack in 1968 and injured 2,367 over the course of 3,391 attacks, and also sponsored 3,761 acts of so-called low level street violence since 1991. The judge said Batasuna was part of the campaign.

"All of these acts have been systematically aimed at specific sectors of the population, and sometimes indiscriminate, so that one should not hesitate to classify the actions of the terrorist organization ETA, of which (Batasuna) is an element, as crimes against humanity," the order said.

Batasuna was defiant in the face of the judicial and parliamentary moves, vowing "not abandon our offices."

In a statement distributed on the streets and on its Web site, the party called on "all democrats and antifascists of this country to come and assemble at our offices." Web banners warned: "Hands off Batasuna. Hands off the Basque country."

ETA is fighting to carve out an independent Basque homeland in lands straddling northern Spain and southwest France.

Batasuna's failure to denounce an Aug. 4 car bombing that killed two people including a 6-year-old girl set in motion the legal proceedings that have led to Monday's historic vote in Madrid. Aznar called Batasuna leaders "human garbage" after that attack.