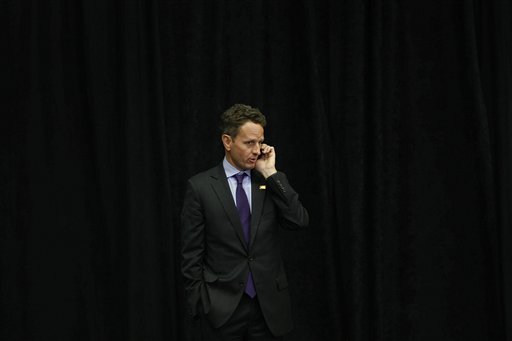 Even during his most frenzied days, when Congress is demanding answers or the president himself is calling, Treasury Secretary Timothy Geithner makes time to talk to a select group of powerful Wall Street bankers.

They are a small cadre of businessmen who have known and worked with Geithner for years, whose multibillion-dollar companies all survived the economic crisis with help from U.S. taxpayers.

When they call, Geithner answers. He has spoken with them immediately after hanging up with President Barack Obama and before heading up to Capitol Hill, between phone calls with senators and after talking with the Federal Reserve chairman, according to a review by The Associated Press of seven months of his appointment calendars.

The calendars, obtained by the AP under the Freedom of Information Act, offer a behind-the-scenes glimpse at the continued influence of three companies _ Citigroup Inc., JPMorgan Chase & Co. and Goldman Sachs Group Inc. _ whose executives can reach the nation's most powerful economic official on the phone, sometimes several times a day.

There is nothing inherently wrong with senior Treasury Department officials speaking regularly with industry executives, or even with the secretary keeping tabs on the market's biggest players, even though critics say Geithner risks succumbing too much to these bankers' self-interested worldview.

"It's appropriate for Treasury officials to keep in touch with those who work in the markets every day, particularly when the economy and the markets are so fragile," Treasury spokesman Andrew Williams said.

What the calendars show, however, is that only a select few can call the treasury secretary.

After one hectic week in May in which the U.S. faced the looming bankruptcy of General Motors and the prospect that the government would take over the automaker, Geithner wrapped up his night with a series of phone calls.

First he called Lloyd Blankfein, the chairman and CEO at Goldman. Then he called Jamie Dimon, the boss at JPMorgan. Obama called next, and as soon as they hung up, Geithner was back on the phone with Dimon.

While all this was going on, Geithner got a call from Rep. Xavier Becerra, a California Democrat who serves on committees that help set tax and budget policies.

Geithner had more contacts with Citigroup than he did with Rep. Barney Frank, D-Mass., the lawmaker leading the effort to approve Geithner's overhaul of the financial system. Geithner's contacts with Blankfein alone outnumber his contacts with Sen. Christopher Dodd, D-Conn., chairman of the Senate Banking Committee.

Partly this is explained by the extraordinary clout of these companies. Goldman, JPMorgan and Citigroup are among the dominant players on Wall Street. Their executives can move not just markets but entire economies. Treasury invested heavily in all of them to keep the industry afloat.

Geithner's relationship with Goldman, JPMorgan, Citigroup and their executives dates to his tenure as president of the Federal Reserve Bank of New York. As one of Wall Street's top regulators, Geithner worked closely with executives and built relationships he brought with him to his corner office at the Treasury Department.

The prominence of those relationships is clear by the company they keep on Geithner's calendars.

On March 24, just after Geithner announced plans to help banks sell off toxic debts left over from the housing market meltdown _ which stod to be a boon for big banks _ his calendars reflect a busy morning. He had a briefing on terrorism financing, a meeting on tightening financial regulations and a prep session for congressional testimony.

Officials at JPMorgan, Citigroup and Goldman had no comment on Geithner's calendars.

Geithner's predecessor at Treasury, Henry Paulson, similarly kept in close touch with Wall Street power brokers. Though his calendars showed many contacts with bankers at the height of the banking crisis, they showed frequent calls with Blankfein at key times. Paulson came to Treasury from Goldman.

At the New York Fed and then at Treasury, Geithner helped put together multibillion-dollar taxpayer bailouts for Wall Street investment firms, including Goldman, JPMorgan and Citi. Even banks that have repaid the money still enjoy massive subsidies. Their quick returns to record profits and million-dollar bonuses sparked outrage.

Critics said the government was too quick to help the banks and was unwilling to let them suffer the consequences of their bad bets.

Geithner's calendars could contribute to the perception that the treasury secretary is too close to Wall Street, said Simon Johnson, a former chief economist with the International Monetary Fund and professor at the Massachusetts Institute of Technology's Sloan School of Management.

"Your worldview in the middle of a crisis depends on whom you talk to and what their perspective is, and you need a broad cross-section of opinions to truly understand what's happening," Johnson said.

By seeking information from such a narrow group of contacts, Johnson said, Geithner risks limiting his exposure to the views of his trusted banker colleagues.

Geithner must believe he can set aside their inherent biases, he said, adding, "I don't see how you do that."