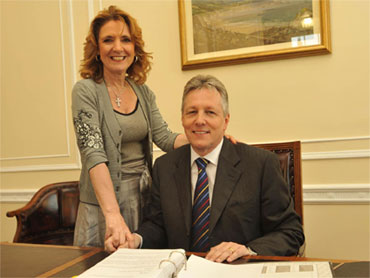 Northern Ireland's Protestant leader temporarily stepped down Monday, forced out of office by a scandal over his wife's affair with a teenager.

Northern Ireland's First Minister Peter Robinson had been under pressure since it was revealed that his wife Iris had a 19-year-old lover and helped him raise tens of thousands of pounds for his business. She was 58 at the time.

In a statement read to reporters, Robinson said he needed time "to deal with family matters" and defended himself against a claim of wrongdoing. He denied the allegation in a BBC investigative report that he acted improperly by failing to warn parliamentary authorities that his wife - also a lawmaker - was securing loans for her lover.

"I continue to contend I have acted ethically and it is particularly painful at this time of great personal trauma that I have to defend myself from an unfounded and mischievous allegation," Robinson said, his voice breaking with emotion.

Peter Robinson has stepped down for six weeks and been replaced by his Protestant colleague Arlene Foster, who promised lawmakers gathered at the neoclassical regional assembly building in Stormont that the 61-year-old politician would be back "with a clear record," she said.

An official with Robinson's Democratic Unionists suggested that the embattled leader could stay away even longer, telling the AP that Robinson's absence could be extended for another six weeks with legislators' approval.

"The party has the opportunity to either re-nominate him or extend that six week period with support of the assembly," the official said, speaking on condition of anonymity. He noted that Robinson would remain at the head of the Democratic Unionist Party.

Citing unidentified party sources, the BBC and Britain's Press Association reported that Iris, 60, would relinquish her dual position as parliamentarian in London and representative to Northern Ireland's regional assembly in Belfast within days.

Iris Robinson, who in the past has described herself as a "born again" Christian, was expelled from the Democratic Unionist Party when word of the financial impropriety spread.

The European Broadcasting Union reports she is in a Belfast facility receiving acute psychiatric treatment.

Details of the affair have not played well with Robinson's supporters. Over the weekend Rev. David McIlveen, a friend of former Democratic Unionist leader Rev. Ian Paisley, said Robinson had a "major problem with regard to solving his own family difficulties, and I personally cannot take the view that a person's private life does not affect their public life."

Still, party leaders seem to have kept the faith - at least for now. Just before the announcement of Robinson's resignation, deputy party leader Nigel Dodds, flanked by prominent party members - including Paisley - said they were offering Robinson "our wholehearted support."

That partnership has already been badly strained by disagreements over who will run the province's justice system, and officials in Britain have expressed concern that the turmoil could hurt the peace process at a sensitive time. Prime Minister Gordon Brown's office said the British leader was monitoring developments.

Northern Ireland has been shaken by a recent surge in attacks by Irish Republican Army dissidents. In March of last year, militants killed two soldiers and a policeman - the first killings of British security forces in Northern Ireland since 1998. On Friday, a prominent Catholic policeman was badly hurt when a bomb hidden beneath his car exploded.