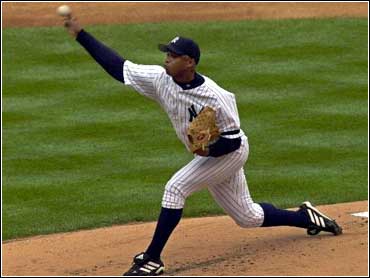 The Mariners took two days to equal their win total at Yankee Stadium from the past two years. And the way things stand now, Seattle could make another trip to New York in October.

"It tells us we can come into hostile environments and play good baseball," said Alex Rodriguez, whose team had lost 10 of 12 in New York before winning the last two games. "Down the road that is very important."

The Mariners, who lead Oakland by three games in the AL West, combined for 16 hits and eight walks, and scored in six of nine innings in a potential playoff preview.

"It's a confidence booster for our team to play a good team on the road and win," manager Lou Piniella said.

Paul Abbott (7-4) allowed one run and seven hits in eight innings to beat the Yankees for the first time. He had been 0-2 with a 10.38 ERA in five appearances against New York.

"I've always struggled here," Abbott said. "I got my nerves toned down and pitched well against these guys. There's so much electricity here and the crowd gets so into it."

Hernandez (8-8) had been out since July 14 with discomfort in his right elbow and minor back spasms. He got into a mild spat with the Yankees coaching staff when he accused one unidentified coach of questioning the extent of the injury, but apologized Saturday.

"The most important thing is that I felt fine," he said. "I have rested and recuperated. I didn't throw all the pitches exactly where I wanted to. But I think they were mostly pretty good pitches."

Javier led off the game with a single, took third on Rodriguez's one-out hit, before Martinez hit his 26th homer to give the Mariners a 3-0 lead. Martinez leads the majors with 103 RBIs.

"His velocity was good but his location wasn't there," Martinez said. "He had trouble getting the breaking pitch over where he wanted it."

Hernandez got out of a bases-loaded jam in the third but struggled again in the fourth. Carlos Guillen led off with a single, advanced to second on a sacrifice and scored on Mark McLemore's double. After Javier singled, Al Martin lined an RBI single for a 5-0 lead.

Hernandez looked away in disgust as pitching coach Mel Stottlemyre came out to the mound. Hernandez retired the next two batters, then left the game.

"I think he was too fat in the strike zone," manager Joe Torre said. "I think he had a little trouble with his control."

Allen Watson, making his first appearance since coming off the disabled list with a dislocated right shoulder, wasn't any better. He gave up a two-run single to Javier in the fifth and an RBI single to Mike Cameron in the sixth.

New York, which maintained a 3 1/2-game lead in the AL East, got six leadoff batters on but couldn't score other than on Bernie Williams 24th homer. Three times the Yankees got the first two runners on in an inning, but Abbott induced double plays from Derek Jeter in the third, Williams in the fifth and David Justice in the eighth.

"The double-play ball is a pitcher's ally, and we turned them today," Piniella said.