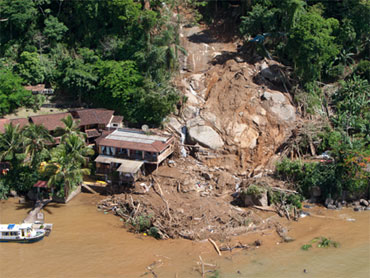 A rain-soaked slab of hillside collapsed on three houses and an upscale waterfront lodge after New Year celebrations on an island resort in this city near Rio de Janeiro, killing at least 19 people, authorities said. Another mudslide elsewhere in the city killed 11.

Ten people were injured by the resort slide early Friday, and about 120 rescuers scrambled through mud and around toppled trees and large rocks to search for more survivors. Police helicopters and navy vessels helped in the rescue effort.

Pezao indicated he feared the death toll could rise. "We'll have to wait for the rescue efforts, but we'll likely encounter a very sad outcome."

Gov. Sergio Cabral, who was expected to visit the area Saturday, released a statement lamenting "this sad and painful" moment.

The mudslide at the Pousada Sankay resort apparently happened after tourists had returned to their rooms following the New Year's celebration at the lodge on Ilha Grande, a 90-minute ferry ride from Angra dos Reis on the mainland, fire department commander Pedro Machado said.

Police said some of the dead may have been in the houses. They did not immediately release the identities or nationalities of the victims.

Coroner Frank Perlini told Globo TV that a boy and a teenage girl were among the victims, which also included at least three men and three women.

"We were told that many of these houses here were rented by tourists for the holidays," Pezao said.

A bulldozer was brought in to help in the search for survivors. Bodies recovered from the rubble were being transported off the island by boats and helicopters. Authorities said the search was expected to continue through the night.

Witnesses told local media the hillside lodge and the houses, which can only be accessed by boat, collapsed after being struck by a slab of earth nearly 330 yards wide.

A broad, raw scar of dirt remained on the jungle hillside above the lodge, which was smashed by mud, trees and other vegetation. Only a handful of houses and small patches of vegetation were left unscathed.

Wooden pieces of the lodge were seen floating near the shore and on the beach.

The hotel, which advertises nightly rates of about $200 and can accommodate 50 guests, was reportedly full. The lodge was inaugurated in 1994, according to its Web site.

Other mudslides killed 20 people across Rio de Janeiro state Thursday, mostly in shanties collapsed under mud or rain in the greater Rio de Janeiro city area. A 3-year-old girl died in a hospital Friday after being rescued from one of the mudslides a day earlier. Her parents also died.

Two key highways linking Rio de Janeiro to Sao Paulo were damaged and temporarily shut down because of the heavy rains.