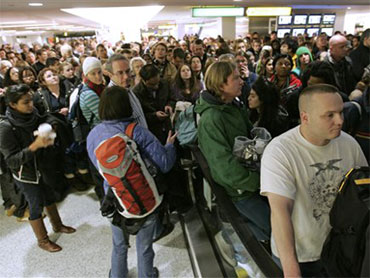 (AP Photo/Rich Schultz)
German authorities evacuated a terminal at Munich Airport Wednesday after a man ran into a non-public area before going through a security checkpoint, a spokesman said.

(At left, crowds of people wait to take the escalator to the departure level after a security breach shut down Terminal C at Newark Liberty International Airport in Newark, N.J., Jan. 3.)

The spokesman said the airport's Terminal Two will be evacuated until the man has been found.
Security officers didn't know why the man ran away or what his intended destination was. Planes were still being allowed to land, but passengers wouldn't deplane in Terminal Two.

Recently in the United States, terminals at and neighboring were evacuated because men found ways around security checkpoints into the airports' secured area.