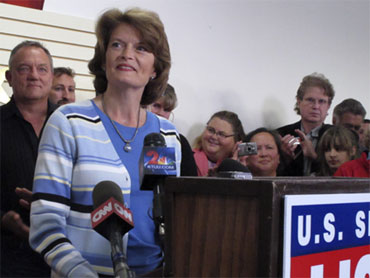 Nearly 98 percent of the write-in ballots counted in Alaska yesterday went to Lisa Murkowski, the Anchorage Daily News reports -- a good sign for the Republican senator in her long-shot, write-in re-election bid.

Yesterday, state officials began counting the more than 92,000 write-in ballots cast on Election Day, as well as the remaining uncounted absentee ballots. The write-in ballots accounted for 41 percent of the votes cast in the Senate election, while Murkowski's Republican challenger Joe Miller captured 69,762 votes, or 34.3 percent of the total vote.

Officials made it through about 20 percent of the write-in ballots yesterday, and more than 89 percent were unchallenged votes for Murkowski. Alaskans interested in voting for Murkowski had to fill in an oval next to the "write-in" line and then write her name.

Another 8.5 percent of ballots were challenged by ballot observers for Miller, but Division of Elections Director Gail Fenumiai gave them to Murkowski anyway, accepting ballots with minor misspellings such as "Merkowski." The Miller camp managed to get 1.44 percent of the write-ins discounted, including ballots cast for "Misskowski" and "Morcowski," the Daily News reported.

Chip Thoma, an observer for the Alaska Democratic Party, told the Daily News he was impressed by the large percentage of write-ins that were perfectly cast for Murkowski.

"She did an effective job," Thoma said of Murkowski's effort to inform voters of the write-in voting process.

Miller told the Daily Caller that he was interested to see that some write-in ballots were cast for him.

"Every one of 15 tables -- when I checked this morning -- had write-ins for Joe Miller, which is kind of interesting," he said.

The Anchorage Daily News, however, reported that just 164 write-in votes were cast for people other than Murkowski, including just two for Joe Miller.

Even though many votes challenged by Miller's campaign were accepted by the Elections Director, the Miller campaign is still trying to challenge them with a lawsuit filed yesterday, asking the state to throw out all write-in ballots that misspell Murkowski's name.

A federal judge yesterday denied Miller's request to halt the write-in vote counting while his lawsuit is considered.

Meanwhile, a district court judge who recused himself from Miller's lawsuit explained yesterday that he did so because of his bias against him, the Alaska Dispatch reports. U.S. District Court Judge John Sedwick served as Miller's direct supervisor while Miller worked as a part-time U.S. magistrate judge in Fairbanks, Sedwick explained in his written recusal. Miller's abrupt resignation "caused me to form a negative opinion of Mr. Miller," he wrote.