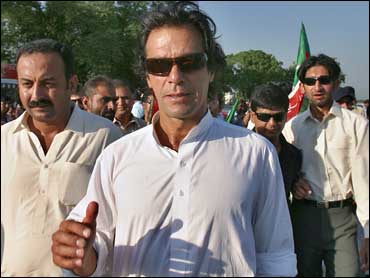 President Gen. Pervez Musharraf is facing a barrage of criticism for Monday's expulsion of ex-Prime Minister Nawaz Sharif, a step which removed a key political rival who could have upset his re-election plans.

In another case of authorities taking a tough line against government opponents, Khan, the leader of another opposition party, flew into Karachi on Wednesday but was halted by police at the airport and sent back to the capital, Islamabad.

The former cricket star was barred because his presence could cause unrest, city police chief Azher Farooqi said. More than a dozen Khan supporters who had been chanting anti-Musharraf slogans were detained, he said.

Khan denounced his removal as "state terrorism" by the Mutahida Qaumi Movement. The party controls the government of Sindh province, of which Karachi is the capital, and supports Musharraf at the national level.

"Terrorism is the only way they know to reach their objectives," Khan told state-run Pakistan television.

Khan's Tehreek-e-Insaf party, or Movement for Justice, is small. But he is an outspoken critic of Musharraf and has accused the MQM of responsibility for violence at an opposition rally in Karachi on May 12 that killed about 40 people.

Amid the domestic political turmoil, Musharraf got a welcome endorsement Wednesday from the second in command at the U.S. State Department.

U.S. Deputy Secretary of State John Negroponte said Pakistan was committed to "more than doing its share" against al Qaeda and Taliban militants.

The remark, made after talks with Pakistani officials in Islamabad, could take some heat off the Pakistan's U.S.-allied leader as he struggles to secure another term in office.

Negroponte noted that Pakistan had lost more than 1,000 soldiers battling militants operating near the Afghan border.

"Significant additional Pakistani forces have been deployed to that region in the past year or so," Negroponte said at a news conference.

"There is no doubt whatsoever of Pakistan's commitment to restoring and establishing security in that part of the country and more than doing its share in the war against terror."

Musharraf faces signs of growing impatience in the United States with his government's failure to rein in militants in northwest Pakistan, where U.S. intelligence says al Qaeda may be regrouping.

The raids took place in North Waziristan, a rugged region on the border with Afghanistan that is home to scores of pro-Taliban fighters, military spokesman Maj. Gen. Waheed Arshad said.

He said around 40 militants had been killed.

Sharif, whose second term as prime minister ended with Musharraf's 1999 coup, flew into Islamabad from London. Authorities halted him at the terminal and he left a few hours later for Saudi Arabia.

Sharif had said he was ready to risk jail by coming home. But officials claimed Tuesday that when they offered him a choice between arrest on corruption charges or exile, he chose the latter.

The manner of Sharif's departure is already the subject of a complaint to the Supreme Court from his supporters.

The court ruled last month that Sharif had an "inalienable" right to return to his homeland.

It is unclear when it might rule on the latest case, but many commentators and legal experts are arguing that the government is guilty of contempt of court.

"No one is going to quite buy (the government's) argument," the Lahore-based Nation newspaper wrote in an editorial Wednesday. "For him to come to Pakistan only to be jetted to Saudi Arabia makes no sense. It is clear that he was sent against his will."

Sharif's removal could deepen Musharraf's unpopularity and reinforce impressions that he is an authoritarian leader. It could also undermine the legitimacy of legislative elections due by January.

In addition, Musharraf faces rising Islamic extremism underlined by a spate of deadly suicide attacks blamed on pro-Taliban militants based near the Afghan border.

U.S. Deputy Secretary of State John Negroponte arrived in Pakistan on Wednesday for talks on counterterrorism and other aspects of American-Pakistani relations, the U.S. Embassy said.

Opposition leaders have vowed to mount street protests to unseat the government. However, demonstrations on Tuesday in several cities were small and ended without incident.

The scope for agitation is limited by the fact that Benazir Bhutto, another exiled former prime minister and leader of the main opposition Pakistan People's Party, is in talks with Musharraf that could lead to them sharing power.

An agreement could help defuse expected legal challenges to Musharraf's attempt to receive a fresh five-year term from lawmakers and quash legal cases pending against Bhutto, who left the country in 1999 in the face of corruption charges.

The presidential vote is due between Sept. 15 and Oct. 15 and the election commission said Tuesday that the schedule will be announced within days.