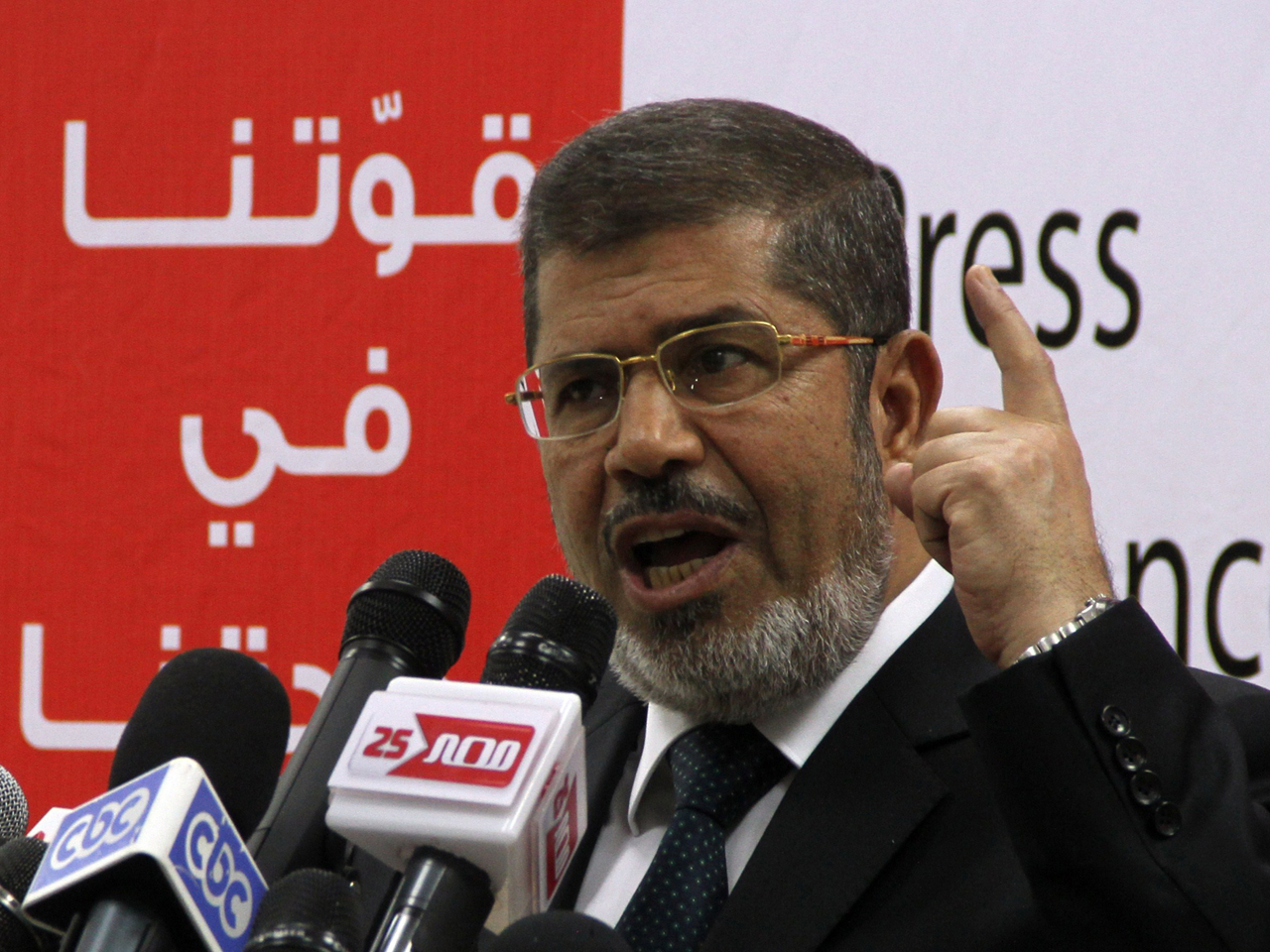 (AP) CAIRO - On the eve of Egypt's presidential run-off election, the Muslim Brotherhood tried Friday to salvage its hopes for leadership, urging voters to back its candidate after it lost its political stronghold with the dissolving of parliament.

Instead of calling for mass protests, the Brotherhood urged action through voting.

In the runoff set for Saturday and Sunday, the Brotherhood candidate, Mohammed Morsi, faces Ahmed Shafiq, who was the last prime minister for ousted President Hosni Mubarak.

"Isolate the representative of the former regime through the ballot box," a Brotherhood statement said on Friday, referring to Shafiq.

With the Brotherhood eyeing the election as a final hope for retaining leadership, Morsi gave assurances that he would work closely with the country's military rulers and keep the interests of the military at heart.

"As president, they will be in my heart and will get my attention. ... they will never do anything to harm the nation," he said.

This week's court decisions dissolving the Islamist-dominated parliament and allowing Shafiq to stay in the race are seen as boosting the military's hold on the reins. The military took over after Mubarak stepped down in February 2011 but has pledged to hand over its powers after a new president is chosen.

An unnamed judicial official quoted on the state-run Al-Ahram news portal said the military will keep legislative powers until either the election of a new parliament or until a new constitution is written.

The Brotherhood became the biggest party in parliament last year after elections that were seen as Egypt's first democratic balloting in generations, but Thursday's court decision erased that power base and left the country without a legislature.

It was unclear how Thursday's dissolution of parliament will affect the race. It could bolster the Brotherhood's Morsi, who represents for many the only option to challenge decades of military power.

In contrast, it could also boost Shafiq, who is believed to be the military's preferred candidate and whom some voters see as the only hope for a secular state.

Security is being beefed up around polling stations nationwide with more than double the number of troops and police compared to last month's first-round vote. According to security officials, there will be 200,000 policemen and 200,000 soldiers deployed Saturday and Sunday to secure an election that may see violence flare.

After the Supreme Constitutional Court ruled that a law governing the parliamentary elections several months ago was unconstitutional because it allowed party members to contest a third of the seats set aside for independents, more than 200 policemen were deployed outside parliament to block lawmakers from entering.

The court also deemed unconstitutional a law passed by parliament that would have banned Shafiq from the election because of his senior position in the former regime.

The Brotherhood reacted in its statement by charging that progress made since Mubarak was ousted was being "wiped out and overturned."

The country is facing a situation that is "even more dangerous than that in the final days of Mubarak's rule," the Brotherhood said.

Power appears concentrated even more firmly in the hands of the generals who took over from Mubarak. This week the government appointed by the ruling generals allowed military police and intelligence agents to arrest civilians for a wide range of offenses — a throwback to harsh practices of the deposed regime. The government said the measure was temporary.

When it was dissolved, the Islamist-dominated parliament had just selected a panel to write a new constitution to outline the powers of the executive. Now the military council might appoint the panel, a step that could lend credence to suspicions that it is hijacking the process and plans to play an active role beyond its own July 1 deadline for handing power over to a civilian president.

Activists who engineered Egypt's uprising have long accused the generals of trying to cling to power, noting that after 60 years as the nation's most dominant institution, the military would be reluctant to surrender its authority or open its vast economic empire to civilian scrutiny.

One of the youth groups, the April 6 movement, which has thrown its support behind Morsi, planned a march to Cairo's Tahrir Square Friday afternoon dubbed "No to the military's soft coup." The Brotherhood did not call on its members to participate.

In his interview late Thursday, Morsi said he does not see the court rulings as a military coup against the revolution, despite a statement to the contrary by a senior Brotherhood member.

Instead, Morsi said, "We are going to the ballot boxes to say `no' to the losers, the killers, the criminals."

Shafiq's opponents view him as an extension of Mubarak's authoritarian regime. Morsi's critics fears he and the Brotherhood will turn Egypt into a religious state and curtail freedom.

Leftist, liberal and secular forces who launched the pro-democracy uprising bemoaned the choice, and some talked of a boycott.

The ruling generals warned Friday they would "deal firmly" with anyone who tries to prevent citizens from voting, according to the state run Al-Ahram newspaper.

The Brotherhood claimed to have won a "landslide victory" in ballot counting from Egyptians living abroad, saying that Morsi won 75 percent of valid votes. The group did not release exact figures, and official results have not been announced.