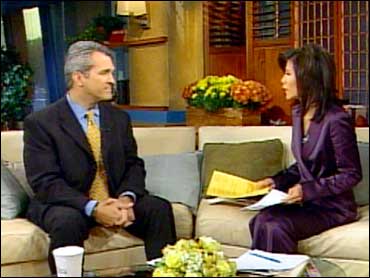 In the latest Early Show Money Matters, financial advisor Ray Martin gives the latest news on the improper trading scandal in the mutual fund industry and explains how shareholders may be affected. He also provides some investment options shareholders can use.

New York attorney general Eliot Spitzer unraveled the first thread of the current mutual fund industry scandal in early September. He announced that his office was investigating the Bank of America for providing, what the New York Times called, "improper trading advantages" to a hedge fund called Canary Capital Partners and other hedge funds.

The Canary fund was managed by Edward Stern, a member of the family that controls Hartz Mountain Industries. Spitzer is still investigating the bank's involvement with Canary and other hedge funds suspected of trying to profit from quickly trading shares of mutual funds, according to reports.

Martin says the public discovered a privilege class of investors were benefiting at the expense of the average investor. Privileged class investors were allowed to make a high volume of trades called market timing, which is rapid trading in and out of funds. This increases the overall expenses and reduces the return to the rest of the investors who don't trade.

Marketing timing isn't illegal, but most mutual funds don't condone it and indicate that in their prospectus.

According to a Stanford University professor, who was mentioned in an article in The Wall Street Journal this week, "Improper fund trading might cost mutual fund shareholders billions of dollars overall, but those losses add up to only one percent or less in lost returns in a given year ... That amounts to about $10 for each $1,000 invested in a fund."

Now, dozens of mutual fund companies are being investigated. Those that have been linked to this trading scandal include:

Martin says the questionable mutual fund's practices have probably been going on for years, but only made oblivious now. You, the investor, however, are none the worse for wear. He explains an average investor's life is not going to be suddenly worse because improper trading practice has been made public.

But, Martin warns, investigators may be scratching the surface and there could be many more companies implicated in the marketing timing practice.

Martin says investors should ask themselves the following questions about their funds:

If the answer to these questions is no and there is no other compelling reason to stay in it, then you might consider getting out of it, according to Martin. If the answer is yes to any of these questions, you should talk to your financial adviser before getting out, Martin says. If you're invested in one of the funds in the epicenter of this improper trading scandal, you have to have a really strong reason to stay in it.

Martin says three major advantages of ETFs are low expenses, flexible trading and possible tax advantages. The funds have much lower internal turnover than a mutual fund, so it will produce lower capital gains to investors.

You should ask your investment adviser about them, Martin says. You can also change mutual fund companies.

In a November report, The Wall Street Journal says some things to look for when picking a new mutual fund are:

The mutual fund itself is an investment vehicle that offers a lot of advantages. It lets investors access diversification and professional management that is ordinarily not available to them with small amounts of money. An average investor can invest as little as $50 or $100 at a time.

Martin says mutual funds are a great idea, but it's the people who run them that should reevaluate their procedures. They have to double their commitment to the individual investor. Martin explains individual investors do have alternatives and they need to learn about them.