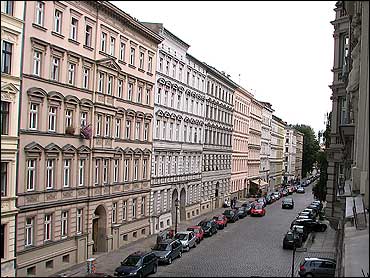 
You will get a basic lesson in German efficiency should you have the misfortune to arrive at a German-hosted dinner party 15 minutes late. A table full of dirty looks will quite likely be your greeting. Don't take it too hard: The Germans, they are efficient. And punctuality is efficiency.

In contrast, sleep in a typical Berlin bedroom with the window open during a rainstorm and whatever's underneath - stacks of paper, books, your face snug in a pillow - won't get drenched. That's because most windows are sunk several inches into a building's face, and can be tilted open at the top rather than sliding up from the base. Ah, German efficiency.

Although I have had the dinner party experience, most of the elements of daily life I associate with "efficiency" are tangible rather than conceptual. They are the simple machines - from window hinges to doorknobs to escalators - that we encounter almost constantly. They are little things, but a good deal of the time, in Berlin, they leave me impressed with their simplicity, and sometimes wondering "why don't we do this in America?"

Example: To enter my small, generally low-tech apartment building, I place a blue stick the size of a pen cap up to a red dot on the wall. The heavy door pops open. To get into my office, I walk into a street-level elevator, place a card on a sensor and it takes me to my floor.

Since coming to Germany, I haven't seen crowds build up waiting to go through turnstiles for public transportation. To board the U-Bahn, one simply walks into the station, buys a ticket from an automated machine and waits for the train a certain number of minutes, which are displayed on an electronic board. Train doors open when you open them yourself, and close automatically when it is time to go. Quite unlike in the New York subway, here I've never interacted with - or even seen - an U-Bahn worker.

Efficiency bonus: When leaving the station, you can approach a still escalator and it will start moving to take you up.

Of course German production is legendary for its quality as well as streamlined production at a minimal cost. If a company anywhere in the world wants to build a motorized product, southern Germany will be on its radar as a place to set up shop. Among autos especially, a "Made in Germany" label ads credibility and cachet - think Mercedes here - and part of that is efficiency.

Back to the windows. Of the German homes I've been in, it is common to have either the aforementioned tilt-and-turn windows or a more classic double-shutter style window. You've probably seen these in the states, but here they are often double-paned and then doubled up to keep cold out in the winter. But they can be thrown wide open to a summertime breeze.

Many new buildings are designed such that little heating or cooling is ever needed. The office the Financial Times Deutschland is in an atrium-like building in the center of Berlin. Its roof is a giant glass-panelled arch. Coupled with the tall windows on all sides, this means individual offices very rarely turn on their overhead lights. And when the sun is too bright, thick shades outside the wall of windows come down, keeping it cool inside.

I'm forgetting what air conditioning feels like. Despite the automated, electricity-using shades and elevator, I'm left thinking this must save a tremendous amount of energy.

Homes and apartments may not be so cutting edge, but occupants seem quite conscious of their energy use. Individual hot and cold water meters are inside nearly every apartment, usually above the sink or near the shower - conspicuously reminding what energy is being used. Energy-sucking clothes dryers are extremely rare. Refrigerators are small. A toilet uses a fraction of the water used by an American toilet. Recycling rules are strict and are followed.

In search of some basis around which to form my layperson concept of efficiency in German design I went to Berlin's Bauhaus museum, which chronicles the life and designs of the influential architectural design school of the same name founded in 1919 and run by Walter Gropius and Ludwig Mies van der Rohe.

A quote by Gropius struck me. The goal of a designer should be make "the greatest possible effect with the least possible means."

To some of the Bauhaus students, this meant constructing an armchair with the fewest pieces of plywood or planning a concrete building with clean lines and clear walkways.

An excerpt from the Principles of Bauhaus Production, from 1925, read, "An object … is expected to serve its purpose perfectly. It must fulfil its function in a practical way, be durable, inexpensive and beautiful."

A fluorescent light bulb went on. These modernist design goals of being "practical" and "inexpensive" mean something different in the 21st Century than they did to Bauhaus students.

Efficiency is no longer judged primarily at the factory level. Rising energy prices mean upkeep of a machine is more expensive, and coupled with a rising concern for climate change, it seems to have shifted the collective idea of what is "practical." Anticipating the costs of energy - heating, cooling, electricity, and even manpower of repairs or simply manning a subway station - when designing and building … now that's efficient.

And here in Germany, it is the norm.